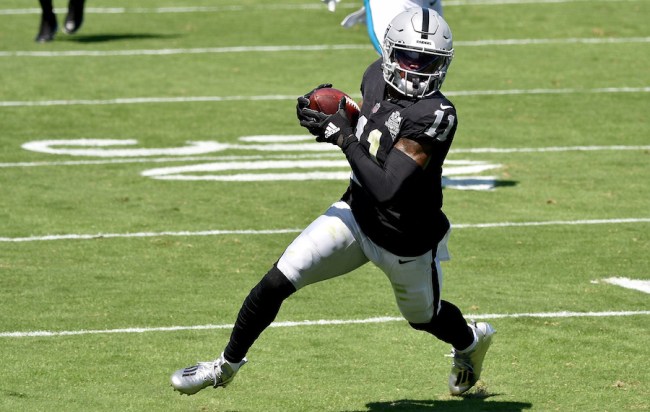 The Las Vegas Raiders had a busy weekend. Jon Gruden wore panties on his face while losing to the Patriots, but more importantly for this story, one of the players on the team was outed as being cheap AF.

Here’s a recap: Dave Cookin, a professional sports handicapper and TV personality, sent out some warning tweets to an unnamed Raiders player for his awful tip on a $600 tab.

Hopefully this tweet gets noticed by some older and wiser @Raiders who can coach the young man on tipping etiquette. He’ll also benefit in the process as good guy perception means more opportunities to do well in other areas.

On Monday, Las Vegas Raiders rookie wide receiver Henry Ruggs found a tweet mentioning him by name as being the bad tipper.

Not long after, the accuser deleted his account. Ruggs decided to go to the source of the accusations.

When did I do this 👀 cuz ya boy ain't said nun yet https://t.co/uqTlABblt3

Here’s the tweet Ruggs is referring to because the internet never forgets.

Cookin replied that he never named names, to which Duggs replied, ummm…not much.

Ion need all the fluff my guy. Tell me when this happened cuz like I said the other dude that said this exact scenario happened and typed my full name hasn't responded so I'm waiting 🤷🏾‍♂️

“Ion need all the fluff my guy,” said Ruggs. “Tell me when this happened cuz like I said the other dude that said this exact scenario happened and typed my full name hasn’t responded so I’m waiting.”

Cookin knows who the player guilty of being an awful tipper but I find it uninteresting the way he replied to Ruggs.

Cookin didn’t just reply “I didn’t say it was you” but instead said “I never said who it was” and then asked for Ruggs opinion on the proper tipping etiquette.

I’m not sure “tell me when” is much of a defense on Ruggs’s part.