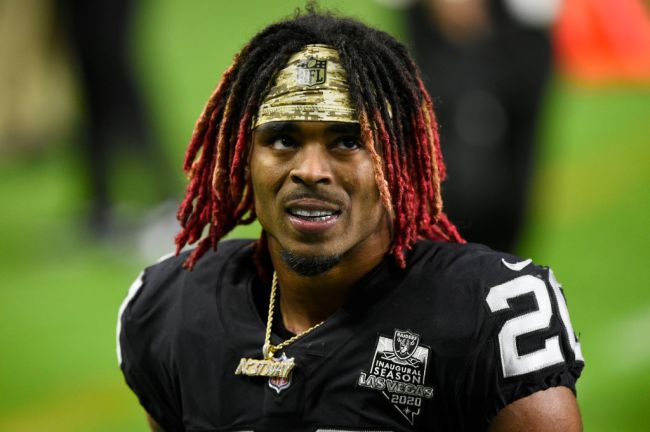 The Las Vegas Raiders can’t stay out of the news cycle. Just days after Raiders wide receiver Henry Ruggs was arrested for his involvement in a fatal DUI crash, and weeks after head coach Jon Gruden resigned over racist/homophobic emails, we now have the team’s cornerback threatening to kill a fan on social media.

On Friday night, Damon Arnette filmed himself waving a gun on camera telling a fan to “pull up” for talking trash to him in his Instagram DMs.

Here is the DM exchange that set Arnette off.

Arnette was recently in the news after a woman sued him over an alleged hit and run incident stemming from last year.

The lawsuit alleges cornerback @damon_arnette was speeding in excess of 65 mph "to avoid being late for a meeting he was to attend at @Raiders Headquarters." https://t.co/q6nHgiHXgl

According to a lawsuit filed Oct. 5, the crash was reported about 7:30 a.m. on Oct. 14, 2020 — about a year prior to the arrest of former Raiders player Henry Ruggs III in a deadly DUI crash.

The woman who filed the lawsuit claims she was stopped at the intersection of St. Rose Parkway and Bermuda Road when she was hit by Raiders cornerback Damon Arnette.

The lawsuit alleges Arnette was speeding in excess of 65 mph “to avoid being late for a meeting he was to attend at Raiders Headquarters located on Raiders Drive, which is the next intersection on eastbound St. Rose Parkway.”

Arnette allegedly took a hard turn at that speed, crashing into the woman’s vehicle. “After the collision, defendant Damon Arnette illegally left the scene of the crash,” the lawsuit claims.