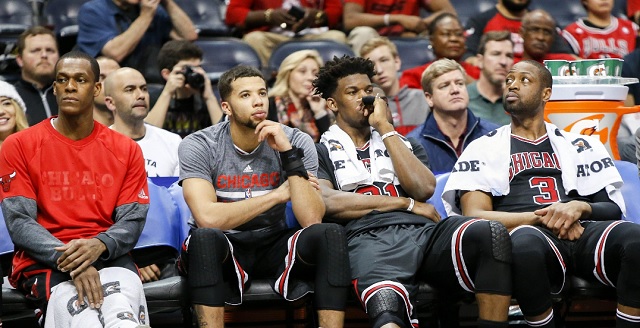 The Chicago Bulls are an absolute disaster. After their latest loss to the Hawks, both Jimmy Butler and Dwyane Wade voiced their displeasure with their team’s performance.

“I don’t know if people care enough. … It just doesn’t mean enough to guys around here,” Wade said, according to the Chicago Tribune’s K.C. Johnson. “And it pisses me off.”

He didn’t stop there: “I’m 35 years old. I have three championships. It shouldn’t hurt me more than it hurts these young guys. They have to want it. I can look at Jimmy and say Jimmy is doing his job. I think Jimmy can look at me and say Dwyane is doing his job. I don’t know if we can keep going down the line and be able to say that.”

“We don’t play hard enough,” Butler said, per Johnson. “This is your job. I want to play with guys who care.”

Wade and Butler’s tactic of complaining about the team’s performance to the media irked Bulls point guard Rajon Rondo who fired off an Instagram post putting both star players on blast.