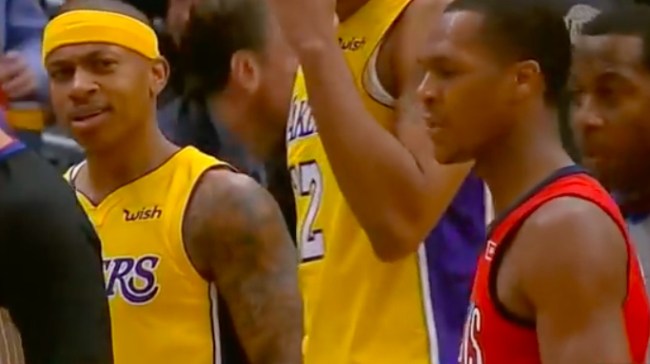 Rajon Rondo and Isaiah Thomas both wish they were back in green and white, when Rondo was a key cog in bringing Boston its first title in over two decades and Isaiah won the hearts of the city with his diminutive stature and gigantic on-court production.

But they are both in shittier situations now, and after last night’s double ejection in the first quarter, it’s become evident that both of them are still looking in the rear-view.

With 33 seconds left in the first quarter of the Pelicans 139-117 victory over the Lakers on Valentine’s Day, Rondo and Thomas got tangled up, exchanged words, and were ejected soon thereafter. Rondo was the clear aggressor, hounding IT defensively during stoppage time.

After the game, Thomas said Rondo hit him three times in the face and brought up with video tribute the Celtics had planned for him earlier this season–the same video tribute Rondo scoffed at in the media, claiming IT hadn’t done enough for the organization to warrant one.

IT said after the game, via ESPN:

“Whatever reason, he’s an upset guy about me,” Thomas said after Wednesday’s game. “I don’t know what it is, but it’s fine. He kept bringing the tribute up, when I was the one that shut the tribute down. I’m far past that. … For me to be ejected was uncalled for.

I mean, my team beat his team in the playoffs last year,” Thomas said, referring to the Celtics beating the Chicago Bulls 4-2 in the first round last postseason. “Maybe that is what’s wrong. I don’t know. There’s nothing. Nothing should’ve made that escalate like it did. He already had his agenda written down right when I checked into the game. It was obvious. He picked me up full court, trying to be physical.

He was being too aggressive for whatever reason, and he also hit me in the face three times. At some point, as a human, if no one is going to protect me, I got to protect myself, and that is when I spoke up and got upset. I hope the NBA figures something out with that, because it was wrong for me to be ejected.”

Thomas was playing in only his second game with the Lakers since the Cavs shipped him away last week.