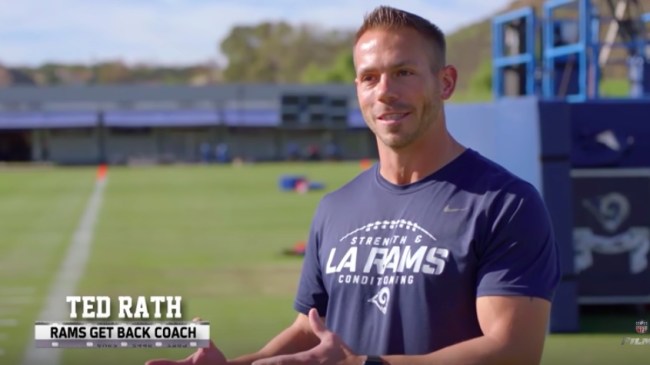 Ted Rath, Rams’ director of strength training and performance, enjoyed a hot minute of cultural appreciation in January when he was featured in a video profile the ‘Get Back Coach.’ Rath came off charming in describing his main objective during Rams games is to avoid unsportsmanlike conduct penalties by keeping head coach Sean McVay off the field when he drifts too close to the action.

One of the weirdest (yet important) jobs in football.@NFLFilms goes inside to answer… what exactly is a Get Back Coach? 😂

Mr. Rath’s moment of shine has been quickly and entirely tarnished when news broke that was arrested on January 15 on charges of sexual battery. According to a press release by the district attorney’s office, Rath “touched an adult woman against her will on intimate parts of her body for the purpose of sexual arousal and gratification” in June of last year. Rath faces a maximum of 18 months behind bars, and would have to register as a sex offender if convicted.

You may be wondering why news of Rath’s arrest broke two months after the it occurred. That’s because the Rams and the NFL kept it all under wraps for two months, managing to conceal the incident during the media colonoscopy of Super Bowl media week.

Rath was not present during the NFC Championship Game or the Super Bowl, but the team claimed it was a medical procedure that kept him from traveling with the team.

A source told Pro Football Talk that  the Rams had told the NFL league office about the arrest, meaning that both the Rams and the NFL knew of the incident for quite some time now. This calls into question the league’s already shaky reputation for transparency and confirms the belief that the NFL will value public relations over scenarios of right and wrong.

The Rams finally released a statement about the incident:

“We are aware of the charges filed against Ted Rath. We take these allegations very seriously. Once the charges were filed, we decided Ted would take a leave of absence from the team as this matter works its way through the justice system.”

I wonder how the NFL would have acted if news broke of a Patriots coach breaking the law.