Rams Are Seemingly Obsessed With Odell Beckham Jr. As He Continues Healing From Knee Injury 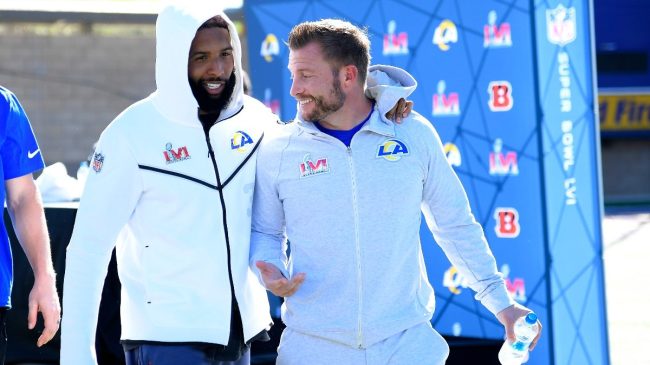 Last year the Los Angeles Rams received a massive boost in the passing game after signing Odell Beckham Jr. He played a large role in helping the franchise reach the Super Bowl, but unfortunately suffered a serious knee injury. Sean McVay and the club still seem interested in signing the star receiver, as it sounds like everyone is obsessed with possibly bringing him back.

Currently, Beckham is a free agent and hasn’t had much attention from ball clubs. Of course, players across the league keep pushing for him to sign with their team, but there hasn’t been any real interest in signing him. However, the situation might be totally different with the Rams, as Sean McVay and the club seem obsessed with bringing him back.

According to the LA Times, Odell Beckham’s locker has remained untouched. In fact, it still has his nameplate on it. “The Rams, in a bit of wishful thinking, have not reassigned the locker — not while Beckham, superstar receiver and current free agent, remains on the market while working his way back from knee surgery.”

Sean McVay isn’t the only person who hopes for Beckham to return, per the LA Times. Offensive lineman Rob Havenstein mentions how he feels every time he sees the empty locker. “It makes you smile every day you come in and see it. It makes me think of my guy. Miss him. Love him. Hope he’s back.”

The Rams have been rather vocal about their aspirations to sign Beckham once again. Jalen Ramsey, Cooper Kupp, and some of the other stars have shared their opinion on the matter. They very well could have Odell Beckham Jr. return soon, as he’s scheduled to return from injury in late October or early November.

We’ll see how it plays out, but LA will surely have some competition in potentially signing the star receiver come that time. Especially considering there will be multiple franchises aiming for a boost in the passing game for the playoff push. Even so, it sounds like Sean McVay and the Rams will do anything to bring him back.