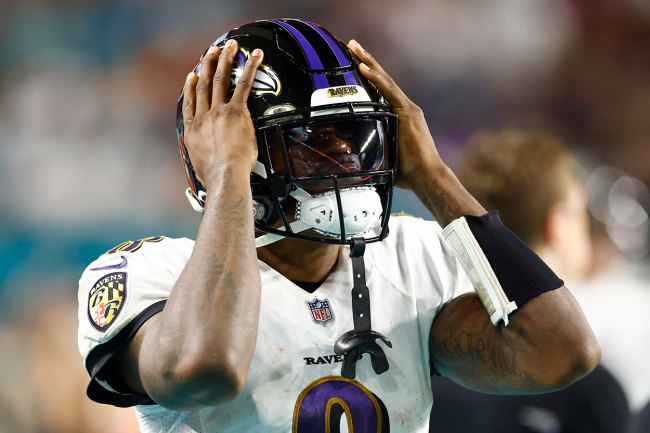 Despite the 2019 NFL MVP trophy in his trophy case, Lamar Jackson receives a lot of hate. The 25-year-old quarterback has yet to make it out of the Divisional Round and Jackson’s arm is often questioned online and in the media.

In addition, there has been a lot made about his contract. Jackson enters the final year of his rookie deal this summer and is expected to receive an extension in the coming weeks.

However, after he chose not to attend any of the voluntary workouts, there was a lot of speculation made about his holdout and what he planned on doing for 2022. His name was in the headlines on more than a few occasions during the offseason.

But according to his positions coach, he isn’t worried about the chatter.

Baltimore quarterbacks coach James Urban recently spoke to his star signal-caller’s ability to block out all of the noise. He said that Jackson has an uncanny ability to keep his focus without allowing anything to prevent him from doing what he needs to do.

Here is what James Urban had to say about Lamar Jackson:

“No, we’ve always had this mentality when we come to this building, when you walk through the doors of The Castle here in this beautiful facility, we go to work. When we walk out onto the field, it’s time to work. We don’t worry about the outside distractions. He is a master of that. He is tremendously good at focusing on the task at hand. When we’re in meetings, that’s the task. Or when we’re on the field, that’s the task.”

Jackson, who is not holding out while waiting for his new contract, showed up at OTAs earlier this month, much to the delight of his teammates. And he was looking THICK after putting on a lot of weight during the offseason.

Not long after arriving for workouts, Jackson started to establish a rapport with his new rookie pass-catcher, Rashod Bateman, and threw an absolutely beautiful spiral. And then he made his future with the Ravens very clear— he’s not going anywhere.