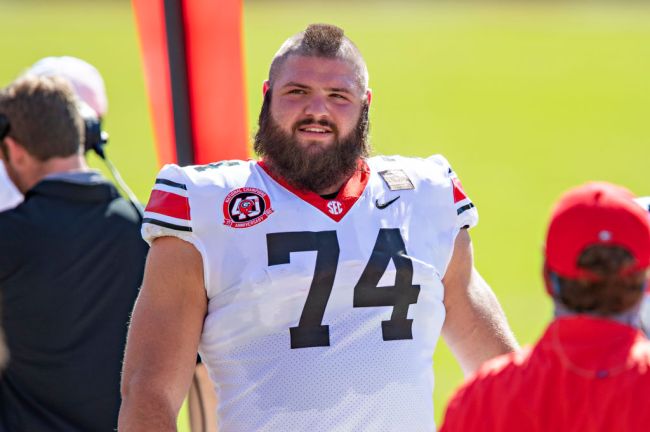 Baltimore Ravens rookie Ben Cleveland grew up in Toccoa, Georgia, a small town in the northern part of the state with a population of around 8,000. If you grow up in a tiny town in the Southeast United States, odds are you’re a hunter, and Cleveland absolutely is.

If Cleveland wasn’t on the football field, odds are he was in the woods somewhere. He told the Ravens’ official website that his dad carried him up into a deer stand before he could even walk.

While the former Georgia Bulldog mostly hunts deer, he’s also no stranger to taking down a few squirrels here and there, especially as a kid. He wouldn’t just shoot a handful of squirrels and leave them there, no, he’d take them home, toss ’em in the freezer and eat them if the meat supply was running low.

It’s more one of those things where you eat what you’ve got in the freezer from the Fall,” Cleveland said. “Had a few squirrels freeze dried in there. Get a little hungry, ain’t got no deer meat left, fry you up a squirrel or two and just go eat that.”

"I don't know if it's a specific squirrel diet, it's more what you have in the freezer." @BenCleveland74 😂 pic.twitter.com/wEutdroRkU

Cleveland’s squirrel hunting adventures go way back. He shares a story from when he played hooky from school one day, but there was no food in the house for breakfast. It was early in the morning and didn’t want to wake anybody in the house, so instead of leaving the house, he simply opened up a window in the living room, took out his .22 and shot two squirrels.

“I went out there and got the squirrels,” Cleveland explained. “Threw ’em in some hot grease, made me some frozen biscuits, and let ’em ride.”

You may be wondering what squirrel tastes like, but they apparently have a distinct flavor. According to Cleveland, squirrel “tastes like squirrel.”