Fans React As RGIII Runs A Blazing 4.48 40-Yd Dash And Hints At An NFL Return 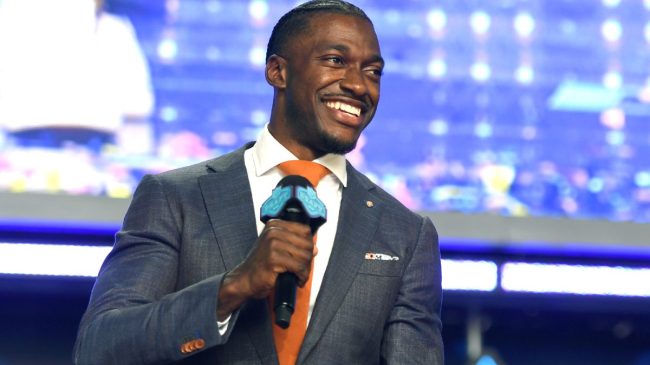 The former Heisman trophy winner was spotted running a sub-4.5 40-yard dash a few weekends ago while participating in the annual Run Rich Run charity event.

His 4.48 time not only turned the heads of attendees like Mike Vick and Cris Carter, but it also caught the attention of NFL teams.

Griffin made an appearance on The Rich Eisen Show Tuesday, telling listeners that organizations have reached out after hearing about his impressive mark.

“The phone blew up as soon as the time went public… I did get some calls because of that 4.48… I wouldn’t say it was shocking. It’s been 10 years and a number of wear and tear on the body, but to run .07 better than I did at the combine, I think that peaked some teams’ interest.”

Host Rich Eisen then pries a bit further, asking if the former passer has any interest in making a return to the NFL.

“I’m a young guy at 32 years old. We see guys like Tom Brady playing till they’re 45 years old. He’s got seven Super Bowl rings so that kind of plays into that, and I don’t have any… The desire to play is still there.”

RGIII opens up on what teams he’d like to join

When you run a 4.48 40-yard dash, even if for charity and #RunRichRun, people take notice — @RGIII talked with us about it and how he's gotten phone calls from #NFL execs about a possible return and where he'd like to go:#DallasCowboys#DirtyBirds #GoBears pic.twitter.com/kpsdiRAZMc

Griffin notes that the clock is ticking, and the fact that he’s been out of football for a year decreases the likelihood he’ll get back in, but he’s done it before with the Ravens.

The quarterback would hope to grab an opportunity for the upcoming season, meaning he’d jump right into team minicamps.

And where would the ideal landing spot be, if Griffin could choose?

He singles out three possible destinations. Dallas, Chicago, and Atlanta.

The move to Dallas comes more from his ties to the area. RGIII is from the Lone Star State, having an All-American career at Baylor.

Chicago and Atlanta, though, give him opportunities to mentor young quarterbacks. He speaks on Justin Fields, Marcus Mariota, and new draftee Desmond Ridder.

This is a far cry from what we heard from Tennessee Titans quarterback Ryan Tannehill, who said it wasn’t his job to mentor new rookie Malik Willis.

Again, this is something that Griffin has done in the past, playing in a backup role to Lamar Jackson. A return to the NFL might not be as crazy as it sounds.

Fans react to RGIII making a return to the NFL

RG3 runs a 4.48 40, says he's open to playing & would love to come to the Bears to help out Justin Fields in any way! https://t.co/JmJMoxcGbL

Let’s go. Due a valiant return. Ready for that tell-all in the fall. https://t.co/IoNoQeRlC9

We’ll see if a team takes a chance on RGIII this offseason.