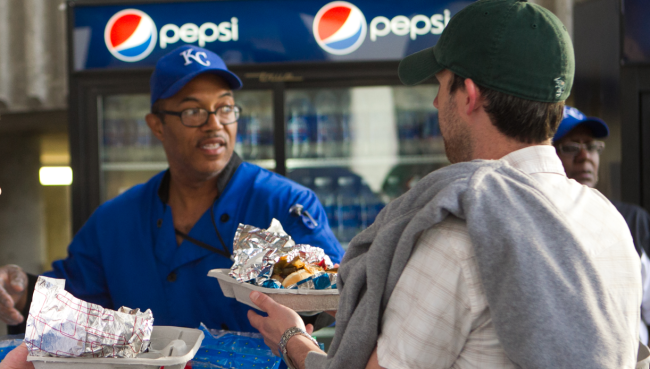 Ballpark food, as we have seen time and time again over the years, has a tendency to get a little weird.

From the Texas Rangers’ Dilly Dog to Guy Fieri’s special Field of Dreams Apple Pie Hot Dog to the Atlanta Braves’ $25,000 Hamburger, you never know what you will find at a Major League Baseball concession stand.

Case in point: The Kansas City Royals are offering a BBQ Reese’s Peanut Butter Cup Sandwich and the internet can’t decide if it’s the greatest culinary creation ever or an abomination that should never see the light of day.

First off, what? Who came up with this?

Turns out it was the brainchild of Aramark executive chef Johnny Woychick.

“I had just brought some smoked pork belly home, and I had some Reese’s Peanut Butter Cups,” Woychick told Kansas City Magazine in June. “So I combined them. Everybody loved it, and I kept that idea in the back of my head.”

On one hand, Reese’s Peanut Butter Cups are fantastic and anyone who says otherwise is wrong. So is pulled pork with Sweet Baby Ray’s BBQ sauce. And of course, you can literally never go wrong putting bacon on anything (or just eating it as a snack).

So it should taste pretty good when you combine them all into one bigass sandwich, right?

And here is what it really looks like at the stadium pic.twitter.com/dWPX5neUlC

Every day we stray further from God’s light https://t.co/635jhfC5oO

Had to re-read the description 3 times. Every time I read it, it sounds more delicious. I’m now at “this doesn’t offend me but I’m not sure it’s worth the cholesterol hit” level of interest.

Why do Americans eat like they’ve got free heathcare? https://t.co/VzyJVuDmt3

According to internet know-it-all Darren Rovell, who apparently knows how to read a press release, the BBQ Reese’s Peanut Butter Cup Sandwich has been available at Kauffman Stadium since Opening Day. Aramark Sports also told him that the sandwich accounted for a third of all BBQ sandwich sales at The BBQ Pit in Section 251 in right field for April and May.

Aramark began serving the sandwich this season in Kansas City as part of a whole host of new menu items being offered at Major League Baseball parks.

In addition to the BBQ Reese’s Peanut Butter Cup Sandwich, Aramark is also offering other new items this year like a PBJ Burger at Citizens Bank Park in Philly, a Jalapeño Cheetos Hot Dog and Fluffer Nutter Fries at Fenway Park in Boston, and Pickle Poutine at Rogers Centre in Toronto.

Need to get to the K stat!

Any suggestions for NYC, ATL, or CIN? 👀

Wonder how they feel about this other, unique Royals’ menu item though?

If y'all are mad about our BBQ Reese's Sandwich, wait til you see our Jerry Garcia Dog with jalapeño pickled dancing gummy bear relish for #GratefulDead Day at the K. @Royals @KariVanHorn @jaybusbee @zerwekh @AramarkSports https://t.co/saj0Y2JF50 pic.twitter.com/48O1YuyP0q