The Red Bull Rampage Is The Craziest Event In All Of Extreme Sports, Here’s This Year’s 1st Place Run 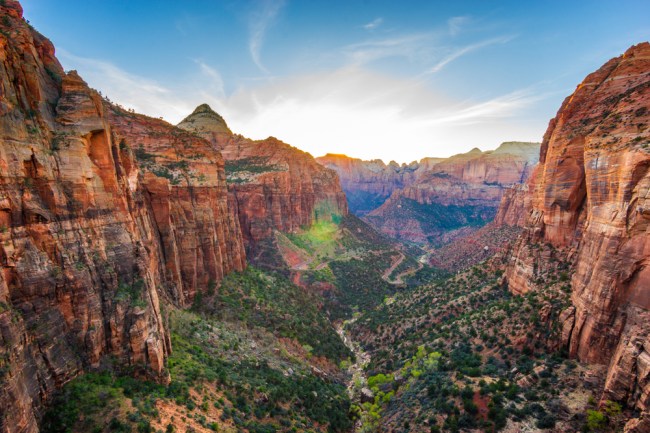 The Red Bull Rampage is an annual Mountain Biking event which takes place amongst the picturesque and potentially deadly cliffs of Virgin, Utah. It’s easy to see what makes this arguably the most white-knuckle event in the world of Extreme Sports. The course features huge elevations drops with extremely narrow landing pads. The course is just a few feet across at the widest portions. A slip and fall off the course would almost certainly lead to injury as the rider would be tumbling down rocky cliffs.

The 2017 Red Bull Rampage took place last weekend and this year’s winning runs were absolutely insane. Coming in 3rd place was Ethan Nell. The 2nd place rider was Cam Zink. And the winner of the Red Bull Rampage 2017 was Kurt Sorge, a professional free rider from British Columbia.

Red Bull’s been dope enough to put up the 1st, 2nd, and 3rd place runs from the Red Bull Rampage 2017 on their YouTube page. I’ve gone ahead and included all three here from 1st to 3rd, with the winning run from Kurt Sorge just below:

In winning the Red Bull Rampage 2017, Kurt Sorge became the first biker to win the event three times. Kurt scored a 92.66 in his first run which was good enough to hold on for Gold/1st Place with 2nd place Cam Zink scoring 90.33.

Before you watch the 2nd and 3rd place runs below, I highly suggest watching this ‘people’s choice’ run that Red Bull also uploaded on their YouTube channel:

You really don’t need to know anything at all about Mountain Biking to appreciate how badass and dangerous the Red Bull Rampage is. I think that’s what makes this one of the most special events in the world of Extreme Sports. Big ups to Kurt Sorge on securing a win this year!