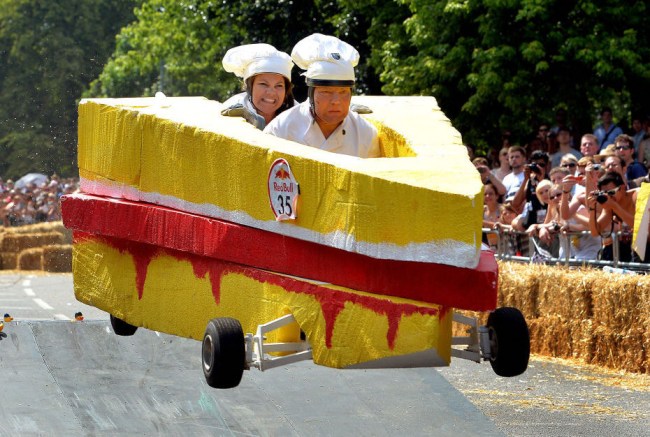 There are plenty of stereotypes associated with Silicon Valley, a place where every person has designed an app they describe as “[A Preexisting Company] but for [An Aspect Of Life That Doesn’t Really Need An App]” with a name that contains exactly one vowel.

There’s also a perception that everyone who works at the tech companies we’ve become hopelessly dependent on is blessed with an almost intimidating amount of intelligence, which can’t possibly be true based on how perpetually underwhelmed I am by the suggestions generated by algorithms supposedly designed to improve my life by introducing me to things I never would’ve discovered without them.

It’s kind of hard to get excited about the potential upsides of artificial intelligence when the people in charge of developing it insult mine on such a regular basis. By all accounts, Jeff Bezos has done pretty well for himself while serving as the large, bald head floating behind the curtain at Amazon, but who was the Big Brain there who thought anyone who buys a vacuum “may also like” a second vacuum?

My biggest beef, however, is with the algorithms that come up with “suggestions” that are less based on my viewing habits and more a continuation of them. I mean, props to whoever got paid what is considered “poverty level” in San Francisco but would make you part of the One Percent in Omaha to write the code that recommends nothing but hockey fight compilations to someone who’s watched dozens of them on YouTube. I can’t knock that hustle, but c’mon, Google. IBM has a computer that beat Ken Jennings on Jeopardy! Try to keep up.

Every once in a while, these algorithms do offer up a solid suggestion, which is exactly what happened when YouTube’s suggested I might enjoy the 2019 Redbull Soapbox Derby that was held in Tokyo, Japan (I added Japan there so you don’t get it mixed up with any of the other Tokyos out there).

I was never interested in being a Boy Scout when I was a kid, which frankly hasn’t seemed to have a noticeable impact on my life. There aren’t many instances where I regret never wearing a handkerchief that’s fashioned to resemble a bolo tie for some reason, but I’m going to feel like a real idiot if I ever find myself in a situation that requires me to know the right knot to use to attach an American flag to a pole and raise it in the proper manner.

However, I am kind of bummed that I missed out on getting to take part in a soapbox derby, which is the only sport where gravity is your co-pilot, properly functioning brakes are for squares, and you can instantly tell which kids had help from their parents and which ones forgot they had to build a car until the day before the race.

Now, I thought I had grown past the age where I would ever find myself engrossed by soapbox derbying, but thanks to a rare solid YouTube suggestion, that all changed.

It turns out Red Bull has been holding soapbox derbies for adults who don’t really have any other chance to get in on the action for the last 20 years, and over that span, they’ve organized over 100 different events all over the world.

While the venues may vary, the recipe remains unchanged at every location. The only major rule teams have to follow when constructing their ride is that gravity must serve as the sole source of its power. Before putting their vehicle to the test, they’re scored on the creativity of their design in addition to a brief performance (usually something involving a stupid dance and more props than a Carrot Top show).

The games truly begin once they hit the course, which is riddled with obstacles like jumps, banked turns, and pools of water. The ultimate goal is to navigate the finish line as quickly as possible (which is a pretty novel concept) and ideally arrive there in one piece. In the end, the judges presumably use some fancy algorithm of their own to combine the creativity and performance scores with the overall time to crown a winner.

However, reading a description doesn’t come close to doing it justice. I have no idea why, but these things are addicting. It might have something to do with my weird love of amateur science. I get the same joy from watching the derbies as I did when I tuned into the Discovery Channel for that show where people competed against each other to see whose homemade trebuchet could launch a pumpkin the farthest. I’m just absolutely fascinated by anyone who devotes their free time to a hobby that requires you to master the finer points of mechanical engineering and aerodynamics

Oh. There’s one other reason these races are so entertaining: the combination of do-it-yourself engineering and a complete disregard for personal safety that almost always creates a cocktail of deliciously spectacular failure. You might only get to see the final product here, but I get more amusement than I should thinking about self-taught mechanics trying to build a car from scratch in their garage; people who probably think proper eye protection while welding involves turning their head and shutting their eyes when sparks start to fly.

Knowing how much hard work went into building these contraptions only amplifies the hit of schadenfreude that comes with watching them disintegrate 20 seconds into a run. Sure, it’s impressive to watch a team that knows what it’s doing effortlessly sail through the Red Bull Soap Box course, but it’s so much more fun to watch the opposite scenario.

I spent six hours watching these after I was first made aware of their existence, and by the third hour, I’d almost developed a sixth sense that allowed me to predict if a car was going to have issues. I can basically just glance at them and immediately see that the center of gravity is too high or the wheels can’t support its weight or the entire thing is made out of cardboard and painter’s tape. Who needs Boy Scouts when you have a skill like this that I’m sure will definitely come in handy one day?

Not to brag, but the same thing happens every couple of years when the Olympics roll around. If you give me an hour, I can become an expert in essentially any sport. A diver made a big splash when they hit the water? That person is going to lose points. A gymnast hopped a couple of times after the dismount? That’s gonna cost ’em. A rider’s horse took a dump during dressage? They’re not coming back from that.

Some would call this a talent, but I prefer “gift.”

The thing that perplexed me most while watching the derbies was that it only took me a few hours to get an incredibly firm grasp on all of the essential principles while so many people who signed up for the competition (and presumably spent more than a few hours building a soapbox car) seemed entirely unfamiliar with those concepts. Don’t get me wrong; these would suck if everyone actually had a grasp on the basic fundamentals of physics because ignorance is responsible for almost all of the best crashes. I mean, good for whoever records the lowest time, but I’m not here for you—I’m watching to see a misplaced weight cause a soapbox and its occupants to go ass over teakettle into a wall of stacked hay bales.

I also learned that some countries play it a little looser when it comes to safety. The American competition was pretty tame but there are other places where liability laws are presumably much less stringent—like Finland. Some of the vehicles those wacky Scandinavians slapped together are impressively daring. It makes sense. I’d build crazy shit too if I had to keep occupied while dealing with months of inhospitable cold and perpetual darkness.

Unfortunately, I’ve just about worn out YouTube’s supply of Red Bull Soapbox Derby content but have an alert set up in anticipation of getting to watch a fresh batch of competitors navigate whatever paved surface with a steep downward grade has the honor of hosting the next one.