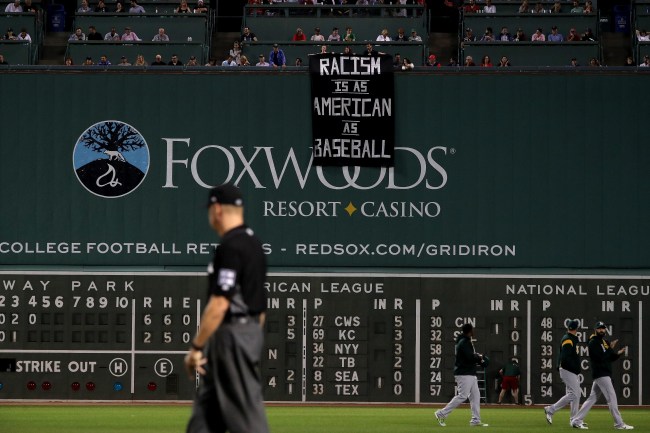 This has been a shameful week for us Bostonians, and you’re reading this from the fingers of a guy who once owned the jersey of a Patriots player who committed a double homicide for getting a drink spilled on him. (Allegedly).

Former Minnesota Twins star Torii Hunter made an appearance on WEEI’s “The Greg Hill Show to discuss the racism he encountered in Boston, claiming that he couldn’t have his wife and kids in the Boston area because the racism directed at players was “so consistent.”

In the wake of Hunter’s comments, the Red Sox organization released a candid statement about the stigma of playing at Fenway.

If you doubt him because you’ve never heard it yourself, take it from us, it happens.

Last year there were 7 reported incidents at Fenway Park when fans used racial slurs. Those are just the ones we know about.

And it’s not only players. It happens to the dedicated Black employees who work for us on game days. Their uniforms may be different, but their voices and experiences are just as important.

We are grateful to everyone who has spoken up and remain committed to using our platform to amplify the many voices who are call out injustice.

There are well-established consequences for fans who use racial slurs and hate speech in our venue, and we know we have more work to do. This small group of fans does not represent who we are, but are rather a reflection of larger systemic issues that as an organization we need to address.

True change starts from within, and as we identify how we can do better, please know we are listening. We hear you, and we believe you.”

Just two years ago, the city unanimously approved a proposal by current Red Sox ownership to rename the famous Yawkey Way outside Fenway over concerns of the former Red Sox owner’s racist legacy. Thomas Yawkey, who owned the Red Sox from 1933 to his death in 1976, was the last owner to sign a black player in 1959, 12 years after Jackie Robinson had joined the Brooklyn Dodgers. Robinson would later say that Red Sox owner was “the biggest bigot in professional baseball.”

Just yesterday, former Sox fan favorite Kevin Youkilis joined Hunter, Jackie Bradley Jr. and Adam Jones in describing the racism he witnessed at Fenway towards one of the Sox own players.

Former Red Sox Player Kevin Youkilis Opens Up About Racism He Witnessed First-Hand at Fenway Park During His Career in Boston.