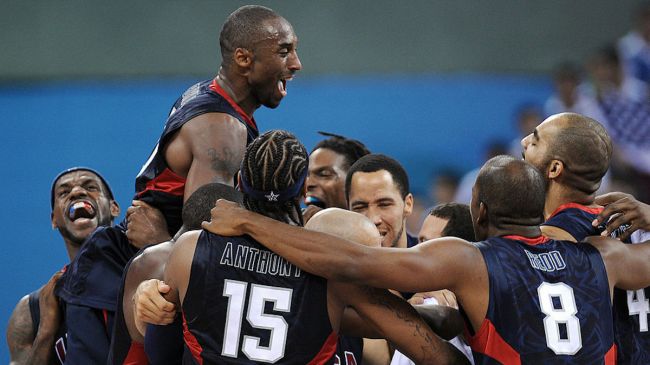 Netflix has dropped the first trailer for The Redeem Team, their upcoming documentary about the famed 2008 Men’s Olympic Basketball Team.

The Redeem Team, which featured the likes of LeBron James, Dwayne Wade, Chris Paul, and the late, great Kobe Bryant, earned the moniker after the United States national team failed to win the Gold Medal at the 2004 games (the only year that the USA didn’t take home the gold since professionals began to participate). The title is a play on the legendary 1992 “Dream Team”, the featured some of the greatest basketball players to ever live.

Perhaps the most eye-opening part of the trailer is the way it seems to be framing Kobe Bryant as the veteran ringer that was brought in to guide the team to greatness.  Bryant, of course, was named the team’s captain.

The Redeem Team (led by Kobe Bryant @KingJames @DwyaneWade & @carmeloanthony) is the untold story of the 2008 US Men’s Olympic basketball team who had everything to lose — and everything to prove.

The Redeem Team would go on to restore US Basketball’s dominance far beyond the 2008 games, as the United States has taken home the gold in basketball at every Olympics since (2012, 2016, and 2020).

In addition to the aforementioned Hall of Famers, the Redeem Team — which was led by then-Duke head coach Mike Krzyzewski — also featured Jason Kidd, Chris Bosh, Dwight Howard, Carmelo Anthony, Deron Williams, Carlos Boozer, Michael Redd, and Tayshaun Prince. The Redeem Team will hit Netflix in the United States on Saturday, October 8 — just a few weeks prior to the start of the 2022 NBA season.

Somehow, despite the fact that it’s now almost three years since Kobe’s tragic death, it still just does not feel real. Rest in Peace, Kobe. You were the best of ’em.