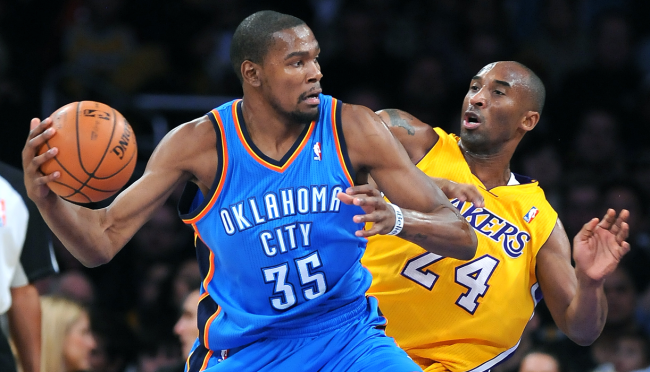 One thing that no one can ever say about Kevin Durant is that he isn’t a very interesting dude. All you need to do to know that is follow him on Twitter or listen to him talk in an interview.

Many fans give him a hard time about constantly arguing with basketball fans on social media.

However, Durant is not merely argumentative with fans, he also likes to chop it up with those that don’t come at him with trolling, criticisms or complaints.

Even when fans do try to instigate, KD either just responds calmly or shuts them up with a sizzling response.

Ima random person and I’m not above talking to random people online or in the streets. Ask about me https://t.co/MAFBbBgFfo

For example, on Wednesday a basketball fan tweeted a photo of Kevin Durant going one-on-one with Kobe Bryant as a tribute to the late Hall of Famer in celebration of Mamba Day, August 24th (8/24).

Despite not even being tagged in the tweet, Kevin Durant still somehow saw it and responded, displaying an amazing memory of the moment that was captured in the photo.

This was a bucket, bean stance was too open and gave me a hook shot going middle. Miss you my boy!!! Lol https://t.co/8UIC4zodFJ

Amazingly, it turns out, Durant was 100 percent correct despite the fact that the moment in the photo occurred way back on January 11, 2013.

Fans (at least the ones that weren’t throwing shade at him) were left gobsmacked that Kevin Durant, who has played in 939 games and made 8,716 field goals in his 14 year NBA career, could not only remember the moment, but also exactly how it went down.

Athlete’s memories are just amazing. They remember every detail even from 10+ years ago.

For the record, Kobe Bryant said that by the end of his career Durant had become so versatile that not even he could figure out how to guard him.

Bryant did, however, know how to get under Kevin Durant’s skin by playing mind games with his then teammate on the Thunder Russell Westbrook.

In 2012, during the Summer Olympics, Kobe was teammates with Westbrook and tried to create friction between Russ and KD by telling the versatile star, “Why do you keep letting KD win these scoring titles? You should be winning the scoring title.”

The Thunder, who lost in the NBA Finals after beating Kobe’s Lakers in the Conference Semi-Finals just prior to the Olympics, never would get over the hump, losing in the Conference Finals twice before Durant and Westbrook eventually parted ways in an acrimonious split.