FedEx Field, The Home Of The Redskins, Becoming A Pandemic Testing Site Spawns An Abundance Of A+ Jokes 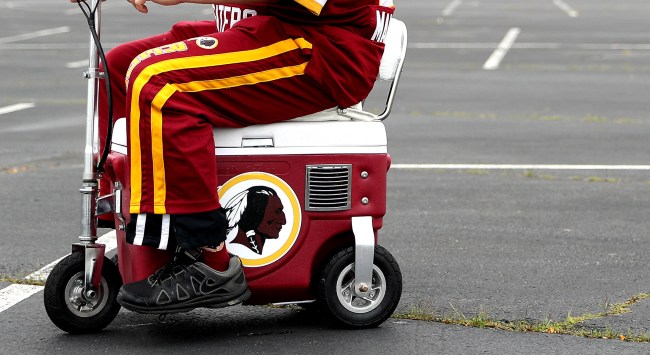 The Washington Redskins franchise has for many years now become the butt of numerous jokes for how poorly managed the organization has been ever since terrible human being Daniel Snyder took over ownership.

The team has become such a laughingstock that fans have stopped watching them play, both on TV as well as in person.

The fans that do actually go to games are embarrassed by what they’ve seen, and not just by the play on the field. What other franchise would misspell one of their legends’ name when inducting him into their Ring of Honor?

On Saturday, it was announced that the National Guard is in the process of turning FedEx Field – the home of the Redskins – into a pandemic testing center (which is a good thing, by the way) as part of a “larger effort to establish clinics where initial health screenings will be conducted and eventually where onsite testing will take place once that option becomes fully available,” reports the Fox D.C. affiliate.

BREAKING —
Military-style tents being set up at @FedExField. Unmarked police cars and military vehicles there too. @ABC7News pic.twitter.com/DAiBEZ5yTJ

With the revealing of this news, beleaguered Redskins fans, well-versed in the recent history of the now sad sack franchise, simply couldn’t help themselves and made a multitude of hilarious jokes involving Snyder, attendance, the team’s medical staff, social distancing, and more.

At times like these it’s nice to see everyone coming together to clown on that stadium. Some real good efforts in my replies. Nice work everyone.

To be fair there haven’t been that many positives coming out of FedEx Field for the last 20 years...

Hope they're not testing on the field. It would suck to be quarantined AND have a torn ACL.

Dan Snyder gonna figure out a while to charge you for parking while you wait in the car for your coronavirus test.

Prob a good place seeing that hardly anyone catches anything there.

Is it for everyone in Philly to come down and get tested?

can’t think of a more isolated, deserted place than this... great call