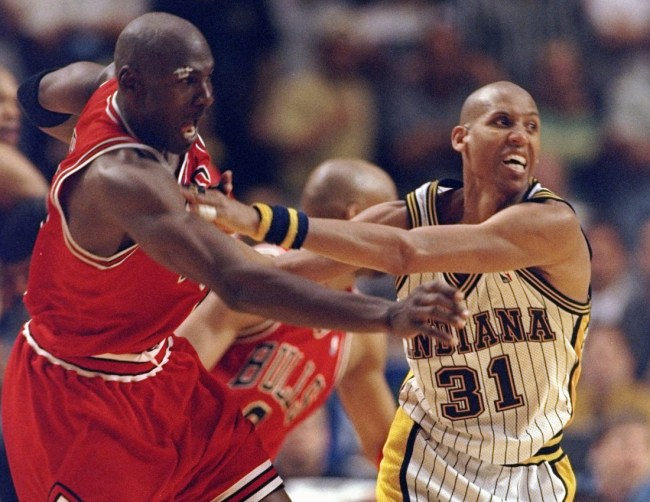 The Reggie Miller-Michael Jordan rivalry runs deep, with both Hall of Famers being two of the fiercest competitors — and most well-known trash-talkers — the NBA has ever seen. Lucky for hoops fans, both Miller and MJ competed against one another for about a decade, giving us plenty of memorable moments from their time going at it on the hardwood.

As we all know, Michael Jordan always got the best of Reggie Miller, with the GOAT’s Chicago Bulls being just a little bit more talented, a little bit more well-coached and a little bit more experienced during the head-to-head matchups. That doesn’t mean Miller didn’t get his, though, with an epic game-winning three during the 1998 NBA Playoffs still one of the most clutch shots in postseason history. For the record, though, Reggie did push off (as the picture above proves).

Given the Reggie Miller-Michael Jordan rivalry, it shouldn’t come as a surprise that the two still have… differences. In fact, Miller said after The Last Dance documentary about the Bulls aired in 2020 that he “might punch” Jordan if he saw him today. Guys, this is 20+ years since they last took the floor together, so, yeah, there’s a little bit of hate still there. So when Reggie was recently asked if he would’ve ever considered teaming up with Jordan on the Chicago Bulls back in the day, is anybody shocked to hear he slammed the idea? Probably not.

The question: Was there ever a point you felt like you might leave? Any superstar pitches to join forces?

“No,” Miller told ESPN. “And if Michael Jordan ever would have called me and tried to sway me to come to Chicago, I would have told him to go (f*ck) himself! ‘I’ll be coming to see you on I-65,’ or whatever that highway is there. ‘I’ll be down to see you.'”

Miller went on to admit that the Knicks came calling, but that was already after Miller and New York “had a storied history,” as he put it.

Would anyone have expected anything less from Reggie Miller? No. After all, the guy competed as hard as anybody the league has ever seen, and had supreme confidence in himself, so the idea of leaving the Indiana Pacers for any team — especially the Chicago Bulls — clearly triggers him to this day. Plus, man, Jordan and Reggie together would’ve been a disaster given their personalities and their competitive history back then.

Miller never did lead his Pacers to a championship — either failing to defeat Michael Jordan and the Bulls, or losing to another, more talented team in the 2000 NBA Finals (Lakers) — but he never got sold himself out to chase rings like many NBA superstars do today. That old school grit, confidence and competitiveness should be applauded.