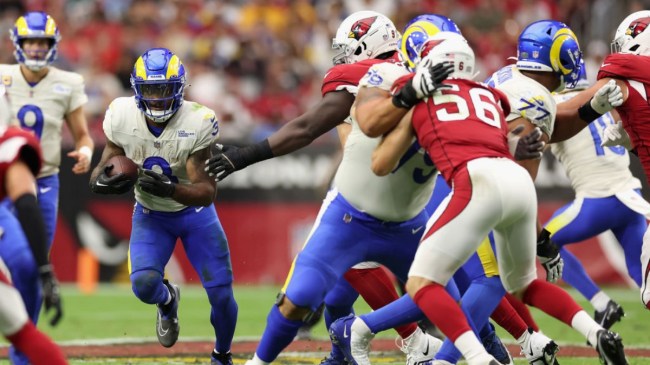 The Los Angeles Rams’ running back situation has been a surprisingly strange one this season.

Fans began the season with the expectation that Cam Akers would be the team’s starting running back and that he would receive the majority of the work at the position. That hasn’t been the case.

Instead it was Darrell Henderson who started early in the season. Even after Akers earned the starting job a few games into the season, his snap share was never higher than 50%.

Then the situation really became strange as Akers missed a couple of games as a healthy scratch because of “personal issues” and the team revealed they would be seeking a trade for Akers.

After this announcement, the Rams were linked with moves for a couple of running backs they could trade for before the deadline.

The deadline has come and gone and the Rams still find themselves without a new running back, but more importantly, they didn’t trade Cam Akers.

According to a report from NFL insider Tom Pelissero, that is the case despite the fact that the Rams received multiple offers for Akers.

The #Rams turned down multiple offers for RB Cam Akers before Tuesday's trade deadline and now are working with Akers' agent in hopes he'll play for them again this season, per sources.

Akers has been inactive the past two games for what the team called personal reasons.

Unless the Rams got insulting offers for Akers, it’s weird for them to have not made a deal if they received multiple offers. It’s just difficult to see how this situation has a positive ending for them or for Akers.

Akers also clearly isn’t the answer for them at the position right now. With Akers and Henderson they’ve put together one of the league’s worst rushing offenses through the first 8 weeks of the season.

It looks like they’ll try to reconcile with Akers and see what they can with the group of running backs they have at their disposal, but the decision to not move on at the position is a strange one from the Rams.