Ric Flair, 69, Says He’s Cleared To Get Back In The Ring Again Just Months After Life Had Him Against The Ropes 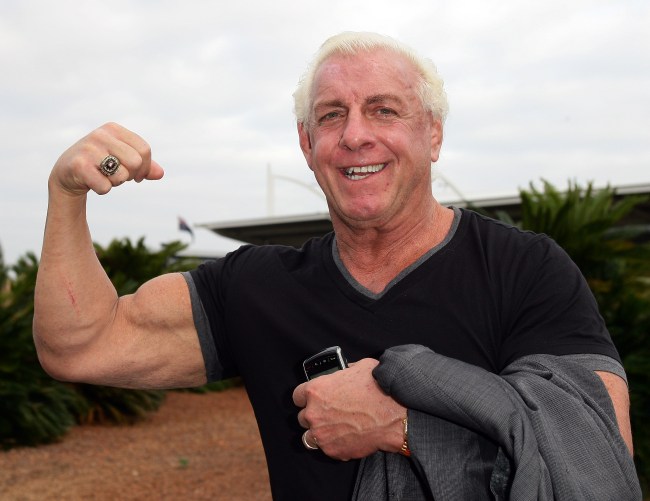 The above quote was excitedly declared by Flair after the wrestling legend was put into a medically-induced coma to fix a “broken intestine” in August. Flair was so weak following the operation, he needed to learn to walk again, couldn’t twist the top off a Gatorade bottle, and lost close to 50 pounds. The catalyst for the 69-year-old icon’s health decline was his relentless and long-standing drinking habit, once revealing that he drank 20 drinks a day during his WWE days.

In a recent conversation with Steve Austin on The Steve Austin Show, Flair described his endless health scares and once dire situation and it’s hard to believe he’s still around to tell them.

“I had kidney failure, respiratory heart failure, I was septic, and I had pneumonia all at one time, so I guess I was in so much pain they had to induce a coma because [wife Wendy Barlow] said I was just screaming. They couldn’t give me enough medicine. And then, it took 12 hours to get me ready for surgery. And then, 12 days in a coma and 31 days I had to sit in intensive care. And then, I had to go to a rehab facility to learn how to walk and just starting from scratch again.”

Fast forward four months and Ric Flair is back in fighting shape. Yes, you heard that correctly. The Dirtiest Player in the Game revealed that he’s been medically cleared for anything, and that includes getting back in the ring.

“I had difficulty doing anything when I still had that bag on my side that was attached to my intestines because it sat right at my waistline and it was hard, but as soon as I got that off, I was back doing 500 free squats. To me, I just need a goal. Does that make sense? But I finally got the weight back on and then I found myself putting more weight back on than I wanted, so I have to be careful with that, but I’ve been working out. I can do anything, benchpress.

“I have to be careful after surgery, the second surgery, for hernia issues. But I literally took it easy. I didn’t do anything. And now I’m full speed ahead. The guys have cleared me to do anything. I’ve actually been cleared to get knocked down in the ring. I didn’t know if they were going to use me in some capacity and you know the clearances you have to have with the health policy, which is so adamant.”