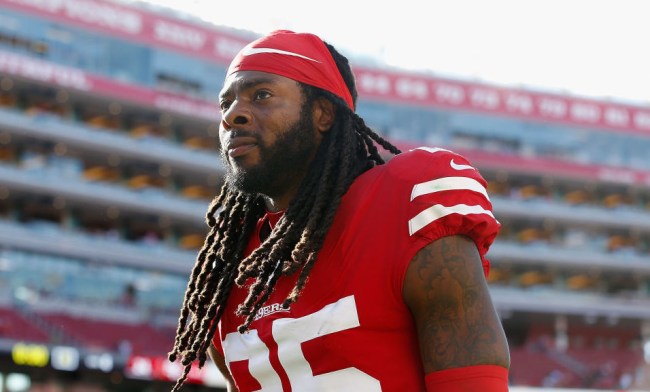 On Monday, the 49ers faced off against the Browns and it’s safe to say things didn’t exactly go as planned for Cleveland, who saw themselves on the losing end of a 31-3 game thanks in no small part to the performance—or lack thereof—of Baker Mayfield.

Mayfield had an impressively unimpressive 13.4 quarterback rating (which would have been higher if he had spiked the ball on every play) and threw a couple of interceptions, one of which came courtesy of Richard Sherman.

You love to see it. @RSherman_25 picks off Baker Mayfield.

Following the game, Sherman went off on the QB for allegedly disrespecting him prior to kickoff by refusing to shake his hand, saying:

“What’s amazing, and annoying, was him not shaking hands at the beginning. That’s some college shit. It’s ridiculous.

We’re all trying to get psyched up, but shaking hands with your opponent—that’s NFL etiquette. And when you pull bush-league stuff, that’s disrespectful to the game.”

However, things took an interesting twist on Tuesday when a couple of videos surfaced that appeared to contradict Sherman’s account, which caused plenty of people to call the safety out.

So Richard Sherman claims Baker Mayfield refused to shake his hand at the coin toss. This video seems to indicate otherwise: pic.twitter.com/4CgOsLKLPL

On Tuesday afternoon, Sherman doubled down but would eventually delete the tweet in which he stuck to his story.

A few hours later, he sent out the following message in an attempt to put the controversy to rest.

Ppl freaking out over a handshake gave me a good laugh. I will lose no sleep over it and have moved on to the next opponent.

Of course, this wouldn’t have been a controversy at all if Sherman hadn’t decided to lie out of his ass, so while Mayfield may have lost the game, I think it’s safe to say he takes the W here.