Video Surfaces Of Baker Mayfield During Pregame With The 49ers And What Exactly Is Richard Sherman So Upset About? (Updated) 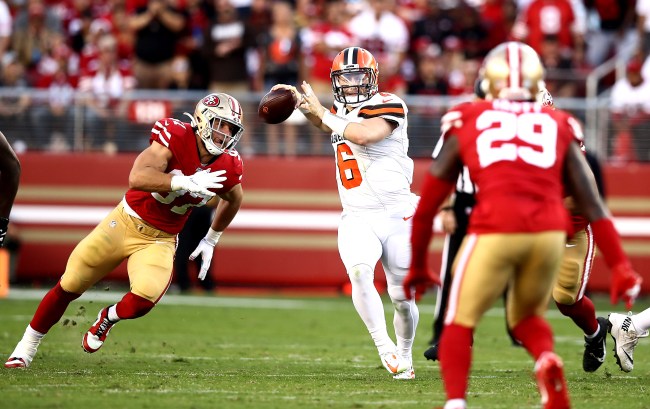 “Baker Mayfield came in this league like he was the reason dudes played in this league, like he’s the guy who has made careers and made guys great,” Spears said Tuesday. “The more you talk, the more they remember. The worst thing you can do is talk about other players. Every player that plays the Cleveland Browns and Baker Mayfield has extra incentive to make this team look terrible because of the quarterback and his personality.

“(All you hear is) ‘This is his moxie, this is how he plays great’ but you know what? When you get to the NFL, don’t nobody give a damn about that. Nobody cares about how much confidence you have. I’ll tell you this too, if they continue to play like this, his team ain’t going to give a damn about his leadership or his moxie because winning equals checks. And when dudes stop getting their checks, they turn to the guy who is responsible for it.”

Now, video has surfaced of Mayfield and Sherman’s meeting at midfield where the DB says he was snubbed by the Browns quarterback.

I found this on the 49ers official Instagram account from their Instagram story last night – don’t see anything disrespectful from Baker here but this is a short clip. pic.twitter.com/8ZvHi4gPFC

How about this time?

To me, and since I can’t actually see either of the players when they get face-to-face, I am not seeing what caused Sherman to go off on Mayfield and his “college sh*t.”

I mean, Mayfield gives daps to every 49er I can make out, including Niners defensive tackle DeForest Buckner. He also obviously didn’t have any problem showing Jimmy Garappolo some love both before and after the game. So what happened that got Richard Sherman so mad?

Needless to say, the internet is, as always, has opinions.

If you watch Baker the entire time, when Sherman walks towards Baker, Sherman intentionally passes by Baker. What a crock of shit that he is making this into a huge thing when it was LITERALLY his fault that he and Baker never shook hands! Sherman is a 🤡

Richard Sherman lying and being dramatic? No way I’m shocked

Weird @RSherman_25 looks like Baker shakes everyone’s hand you skipped by him. Stop making shit up.

Baker is disrespectful, God did everything to humble that man by going the long way to success, and he still hasn't learned. He will. Trust me. He will learn or he will fail beyond his wildest imagination until he learns, if he ever does

Sherm leaned... look at baker, he didn’t.. but leaned in for everybody else. I’ve given alot of dap in my day. This is a diss.

Sherman is playing mind games with himself.

You can see Baker give Sherman a WTF look as he walks right by him.

Sherman’s exact quote was, “That’s some college shit It’s ridiculous. We’re all trying to get psyched up, but shaking hands with your opponent — that’s NFL etiquette.”

Based on that, very unclear video, it would appear that Baker Mayfield clearly understands “NFL etiquette.” He only has a problem with shaking Richard Sherman’s hand. Hmmm…

Richard Sherman says Baker Mayfield is a violator of “NFL etiquette.”@KyleBrandt says it takes one to know one. pic.twitter.com/tLhuAbSeC5

So, Baker Mayfield & Richard Sherman shook hands before the coin toss. It was Baker running off afterwards that pissed him off? pic.twitter.com/lJd9x500u0

Bruh had me slow this down like the zapruder film

UPDATE: It would appear that Richard Sherman may have been making things up.

This is the moment I’m in front of him. Shook up with every other Brown up there pic.twitter.com/nJBpVzDd1J

So Richard Sherman claims Baker Mayfield refused to shake his hand at the coin toss. This video seems to indicate otherwise: pic.twitter.com/4CgOsLKLPL