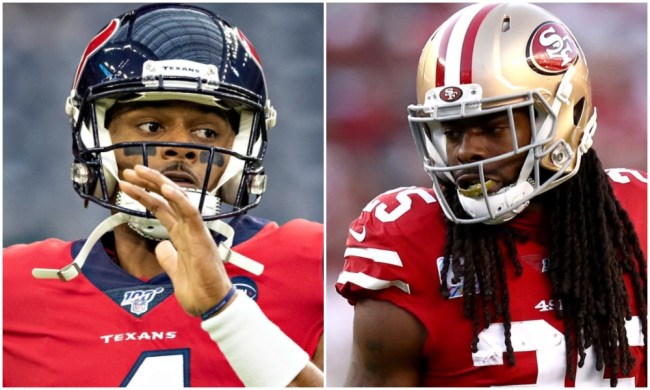 I’m not sure a single football player in the NFL has been told that they should force a trade to the Jets and get to New York ‘as quickly as possible’ in the last decade or so, but that’s exactly what Richard Sherman thinks Deshaun Watson should do.

Things are beyond uncomfortable for Watson and the Texans at the moment and it seems like only a matter of time before he’s shipped out of Houston. While the Dolphins, Panthers, and 49ers have been among the rumored teams that may look to trade for Watson, the Jets have recently entered that conversation thanks to their stock of draft picks.

Sherman sees the Jets as a great fit for the 25-year-old quarterback after his former defensive coordinator Robert Saleh was hired as New York’s newest head coach.

“If I was Deshaun, I’d get out of there as quickly as possible. I’d head to New York. … The Jets,” Sherman said on ‘The Cris Collinsworth Podcast,’ a show Sherman co-hosts. “It would be the most beautiful. Decent offensive line. They’d have to find some threats, they’d have to find some offensive weapons, but I think there would be a lot more people excited to be there. I think the free-agency market this year is gonna be oversaturated because of the salary cap, but that’s what I would do. I’d be out of there on the first thing smokin’.”

Watson finished the 2020 campaign with 4,823 yards, the most in the league, 33 passing touchdowns, and seven interceptions which earned him his third straight Pro Bowl nod. The Texans were horrific despite those numbers, however, as they finished the year 4-12 and now Watson is reportedly not in contact with the Texans. Sherman doesn’t blame him for keeping his distance, either.

“They’re saying [Watson is] not answering any calls or any texts — I wouldn’t either,” Sherman said. “He’s done everything. He’s taken a beating for you guys and played efficiently.”

Sherman’s endorsement for a Watson move to New York aligns with Colin Cowherd’s as well. The FOX Sports radio host recently said the move would be perfect for both sides as Houston could get a number of first-round picks from the Jets in a potential move.