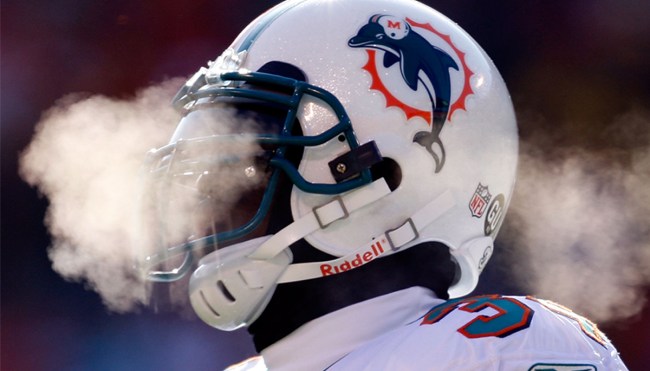 Ricky Williams is probably one of the biggest “What If?” stories in NFL history and a shining example of someone who got absolutely screwed by playing during a time when marijuana was still considered a dangerous and destructive substance as opposed to how it’s widely viewed today.

The running back was drafted by the New Orleans Saints with the fifth overall pick in the 1999 NFL Draft after winning the Heisman Trophy during his senior season at Texas, where he set the record for the most career rushing yards in NCAA history (although that mark was eclipsed by Ron Dayne the following season).

Willaims more than lived up to expectations during his first few years in the league and seemed poised to take things to an even higher level when he was named to the Pro Bowl and All-Pro teams after being traded to the Dolphins in 2002.

However, things started to fall apart prior to the 2004 campaign when he revealed he was facing a four-game suspension after testing positive for weed on multiple occasions and opted to retire instead of serving it.

While he returned to Miami in 2005, he was suspended for the entire season after yet another positive test and took his talents to the CFL. He would ultimately play five more seasons in the NFL before retiring in 2012, leaving behind one of the more complex legacies in recent memory.

Williams has been incredibly open about his relationship with cannabis and has long served as a vocal advocate for the drug and the many medical benefits associated with it. As a result, it came as no surprise that he recently opted to launch his own brand aptly dubbed “Highsman.”

He recently sat down to chat about a wide variety of topics with USA Today Sports in a wide-ranging interview where he shared a fairly shocking story about one of his first exposures to drug use in the NFL after joining the Saints (the segment in question kicks off around the 3:50 mark).

Here’s what he had to say via For The Win:

“My rookie year, a Hall of Fame player on the team, he’s in the Hall of Fame now, invited me over to his house and he gave me the speech about how to take care of yourself in the NFL.

That was a vet, teaching me as a rookie, how to take care of myself in the NFL. “

Now, I’m not going to name any names, but based on an investigation that was very easy to conduct, it would appear there is a grand total of one player who played on the New Orleans Saints when Williams was a rookie who is also a member of the Pro Football Hall of Fame—and it is one of the last people on the planet I’d want to have pissed off at me.