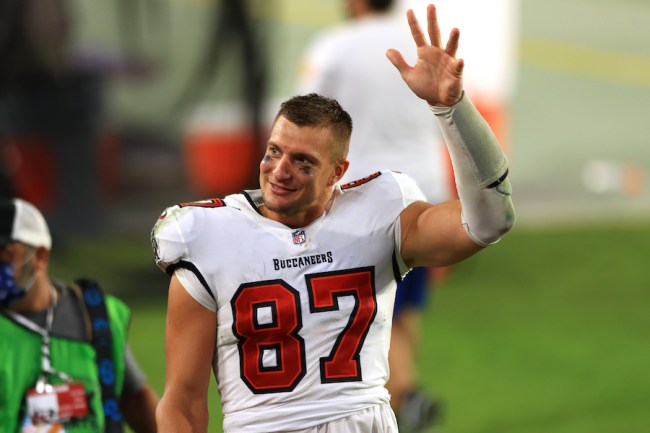 Rob Gronkowski always has a smile on his face. The guy looks as though he genuinely enjoys every day of his life, whether he’s wrestling in his backyard or getting his face melted off by the Florida heat.

Gronkowski even has a good time reading mean tweets about himself.

Gronkowski is positive as hell. In fact, he’s so positive all the time that Buccaneers teammates have a nickname for the future Hall of Famer.

Leftwich also revealed the Bucs' nickname for Gronk — "Gronkitis," because his positive energy is so infectious. "I don't think he's ever had a bad day."

“Gronkitis” is sure to cure the blues. Unless the Bucs lose to the Redskins. Ain’t no curing that heartbreak.

Gronk provided a few chuckles of his own today, discussing his favorite off-field moment with quarterback Tom Brady.

Gronk asked by @JennaLaineESPN for his favorite off-field moment with Tom Brady. "Going to the Kentucky Derby and seeing him take a shot and just seeing his face, the disgust." Said he thinks it was Fireball. pic.twitter.com/K9QGDUOiCy

Now that’s funny. Not as funny as Brady’s impression of Gronk but pretty funny.