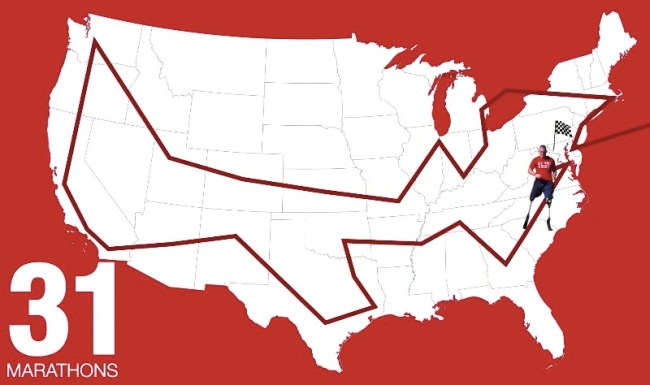 Rob Jones is one inspirational man. He lost his legs back in 2010 as a Combat Engineer in Afghanistan with the Marines, an incident that would crush the spirit of most people but Rob Jones isn’t most people. Rounding out last year, Rob Jones ran 31 marathons in 31 cities in 31 days (in 2017) all on prosthetic legs and he did this to raise money for charity.

‘First things first, we gotta design a workout program and get back on our feet again.’ Those were the words spoken by Rob Jones while sitting in a hospital bed after losing his legs. Now, all of these years later, Rob Jones is using his story and fortitude to raise over $200,000 for Stephen Stiller Tunnel to Tower Foundation, Coalition to Salute America’s Heroes and the Injured Marine Semper Fi Fund according to Purpose2Play.

The Marines published this video about Robe Jones’ journey back in December:

In 2014, Rob biked from Bar Harbor, Maine to Camp Pendleton, California to raise money for charity. A journey that took him 5,180 miles across the country. When it came to running 31 marathons in 31 cities in 31 days, Rob traveled a total of 9,600 miles across the globe because he started in London and finished the next 30 days/marathons in the US (and 1 in Toronto). What’s been driving him along the way? Here’s what he told Runners World magazine: “I hope that a veteran who comes home psychologically or physically wounded will see what I’m doing, and realize that we aren’t broken or incapable of reintegrating into society.”

We should all be more like Rob Jones, and to read about his story you can CLICK HERE to visit FanSided‘s Purpose2Play blog.