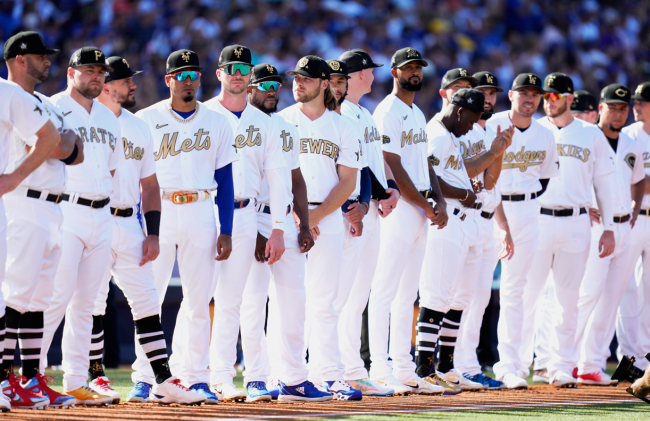 Another significant Major League Baseball event is in the books with the 2022 All-Star Game being played on Tuesday night.

And as is customary with occasions such as this, MLB has once again managed to screw something up.

In a tradition that only Major League Baseball seems to be able to pull off on a regular basis, many fans were left disappointed by the league’s uniforms designs.

Much like with this year’s 4th of July caps, the 2021 All-Star Game, the 2021 Field of Dreams game, and the 2019 Players Weekend, many people absolutely hated the 2022 All-Star Game uniforms.

My dumb, pointless hill to die on today: BRING ALL-STARS WEARING THEIR OWN TEAM UNIFORMS BACK

I remember when the All Star game was a cavalcade of colors with the different uniforms. Now its Charcoal vs. White. BAH! MLB sure knows how to suck the fun out of things. pic.twitter.com/PEIJlP03ga

When New York Times baseball columnist Tyler Kepner asked Manfred about the All-Star uniforms prior to the game, the commissioner’s response was, “I never thought that a baseball team wearing different jerseys in a game was a particularly appealing look for us.”

Wow. The commissioner of Major League Baseball actually said that.

Manfred also praised Nike for their uniform designs, because of course he did. They help pay his annual salary of $17.5 million (while most Minor Leaguers continue to live below the poverty line).

So, as has also become an almost daily tradition when it comes to Major League Baseball, many people ripped Rob Manfred to shreds for not having a single clue about what fans really want to see.

He Praised Nike cause they are all making more money selling more uni’s for the MLB. Keeping the players in their own jersey, less jerseys to buy. But I would much rather spot my team & their colors on the field. It’s all about the money…

As a 1970's Tigers fan I didn't have a lot to cheer for, but in 1976, when I saw LeFlore, Staub and Fidrych starting and wearing a Tigers uniform in the All-Star Game, it meant the world to 10-year-old me. I think this a really crappy decision. #AllStarGame

He’s wrong. The variety is the most appealing look there’s ever been on an MLB diamond. Recognize your hometown heroes instantly. See how many stars have traveled from how many cities. Instead we get the visual experience of stormtroopers vs drones.

Not sure what is worse as a baseball fan, Rob Manfred calling the World Series trophy “a piece of metal” or his claim about the hideous All-Star Game uniforms.

Of all the things Rob's said or done as Commissioner, this is the absolute worst.