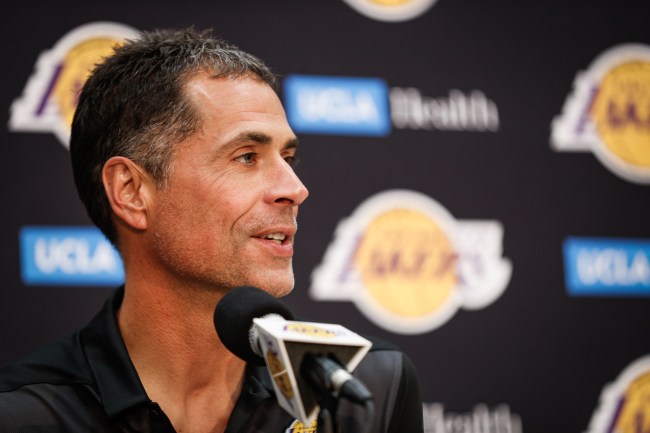 Rob Pelinka and the Los Angeles Lakers probably woke up this morning feeling refreshed after a nice long holiday weekend, just wanting to get back to work without much drama — something they haven’t been able to avoid much of lately. Well, that all got washed away really fast, because a revealing ESPN report detailed just how dysfunctional things have allegedly been with the franchise over the past year or so.

Sure, we knew about the shitshow that became the Anthony Davis trade rumors, and we knew that, eventually, we’d be given more details about the reasons the team’s now former President of Basketball Operations, Magic Johnson abruptly resigned, but we couldn’t have imagined things were this bad.

Among the things released in the ESPN piece included Johnson’s reported bullying of employees, LeBron James’ agent, Rich Paul, talking shit about his then head coach to the NBA’s Commissioner, and, well, it just paints the Lakers as a terribly run franchise. To say this may impact how top free agents view the team this summer is an understatement.

While the entire report is embarrassing, the team’s general manager, Rob Pelinka, may want to address a few things said about him in there. Pelinka, a former sports agent who represented the likes of Kobe Bryant and James Harden, among others, ended up in the Lakers’ front office a couple of years ago. Since then, things haven’t exactly been stable, and some around the league reportedly even “despise” Pelinka, according to Stephen A. Smith.

The latest article coming from ESPN might show that Rob Pelinka is a flat-out liar, as Twitter got hold of a story the GM has publicly told about Bryant and actor Heath Ledger meeting for dinner, but, apparently, never actually happened. Here’s what the ESPN report detailed.

“There was one time when Kobe, who I worked with for 18 years, was going back to play in Madison Square Garden, and he had just seen ‘The Dark Knight,’” Pelinka said. “Obviously, you guys saw that movie, and he’s like, ‘Hey, hook me up with dinner with Heath Ledger, because he got so locked into that role. I want to know how he mentally went there.’ So, he had dinner with Heath, and he talked about how he locks in for a role.

“And Kobe used some of that in his game against the Knicks.”

A source with direct knowledge said no such arrangement was made and no dinner ever took place.”

Uh, looks like Rob Pelinka’s got some explaining to do — especially since there are some inconsistencies with the release of The Dark Knight and when Pelinka allegedly got Kobe Bryant and Heath Ledger together prior to the actor’s death in January of 2008. Making matters worse, there’s even video of Rob Pelinka recounting the story to a group of people. Take a look below.

There's video of Pelinka telling the Kobe-Ledger story. How come someone blatantly lie like that? pic.twitter.com/hsh1u8wwp7

Once Twitter got word of the story, which seems fabricated if not a blatant lie, people didn’t hold back in absolutely shredding Rob Pelinka and the Lakers. Just take a look at what some on social media were tweeting about this whole thing.

rob pelinka lacing them up before work pic.twitter.com/7OtX4vWfFc

Rob Pelinka when asked about the Heath Ledger story: pic.twitter.com/A2gkmPJb6o

Sounds like Magic Johnson's nice guy veneer isn't true to how he is behind closed doors, and that Rob Pelinka is a walking imitation of Jim Carrey's character from Liar Liar

When Rob Pelinka hands you a max contract to sign on July 1st pic.twitter.com/z3aBE8fQtx

Magic Johnson after hearing Rob Pelinka made up a story (and a fool of himself) about setting up a dinner with Kobe and Heath Ledger #TheDarkKnight pic.twitter.com/hfm3ICQNNV

People who knew it didn’t happen: Rob are you sure this story will work about Kobe meeting Heath Ledger?

Since Rob Pelinka was able to make that meeting between Kobe and Heath Ledger happen – I wonder if he can set up a meeting between me and 2pac 2moro! I need to be inspired like that.. pic.twitter.com/JfxI4qwY1N

Rob Pelinka: So I set this dinner up for Kobe and Heath Ledger…

The Lakers are an absolute dumpster fire right now, with the team dominating headlines in the worst way even though they missed the NBA Playoffs. While LeBron James can recruit all the players he wants, with stories like this about the team and Rob Pelinka floating around out there, it’s tough to imagine superstars would want to take part in such drama and dysfunction.