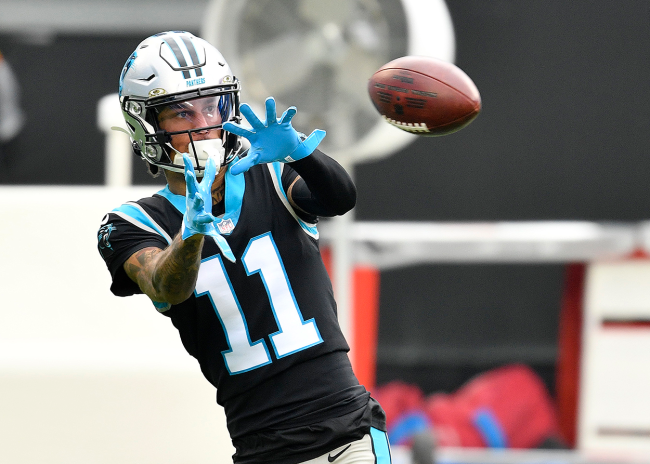 Robbie Anderson is caught in the middle of a quarterback competition. The 29-year-old Panthers wide receiver is entering his third year with the Panthers this fall and does not know who will be throwing him the ball.

Earlier this week, Carolina traded a conditional fifth round pick to Cleveland and added Baker Mayfield to a quarterback room with Sam Darnold, P.J. Walker and Matt Corral. In doing so, the organization traded a significant amount of NFL Draft capital to stage a quarterback competition.

Meanwhile, Anderson’s old comment on a potential Mayfield trade from earlier in the offseason that ultimately became reality went viral. His comment did not appear to be in favor of bringing in the former Browns No. 1 overall pick.

However, he is saying otherwise. Anderson wanted to be very clear that he did not mean any disrespect to Mayfield and was simply defending Darnold.

It did not seem that way and Anderson was asked about the comment on the most recent episode of the I Am Athlete Podcast. The episode was filmed prior to the Mayfield trade, which makes things even more interesting because he doesn’t seem to be backtracking.

During his appearance, Anderson doubled down. He said that he was not bashing Mayfield. Rather, Anderson has developed such a chemistry with Darnold between his time with the Jets and now, and he did not want to mess that up.

In addition, Anderson had a very interesting take on Darnold.

He said that he thinks the former No. 3 overall pick out of USC should not have been forced into starting during his rookie year. Anderson believes that Darnold’s development was messed up as a result.

At the end of the episode, Anderson agrees with a comment that his numbers are not what they could be because of his quarterback. *eyeballs emoji*