Robby Anderson Can’t Wrap His Mind Around Panthers’ Mascot ‘Sir Purr’, Who He Thinks Is A Bear 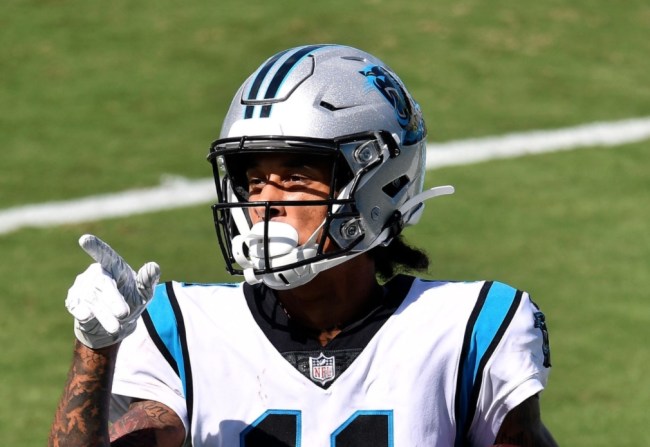 Robby Anderson made his debut for the Panthers on Sunday afternoon after spending his first four seasons in the NFL with the Jets. Despite the fact that Carolina will be paying him $20 million over the next two seasons, it’s pretty clear that Anderson still has a few things to learn about his new employer and team.

During the Panthers’ 34-30 loss to Oakland, Anderson was caught on a hot mic while sitting on the bench. Looking up at the jumbotron he saw the team’s mascot, Sir Purr, cheering and asked his teammates “what’s that bear doing?” Not only was the question itself hilarious, the way he delivered it was classic as well.

Then, the exchange with DJ Moore saying “that’s Sir Purr, bro” like everyone knows the name of the damn mascot just takes things to the next level.

Robby: Y’all call him that?

To Anderson’s defense, Sir Purr may need a bit of an upgrade. In no way does he actually look like a bear, maybe the big gut, and not all that distinct panther features throw him off. Then again, to think your team, named the Panthers, would have a bear as a mascot is out there.

Now that Anderson is fully acquainted with his team’s mascot, Carolina fans should expect even more from the wideout after a strong debut in his debut for the team on Sunday.