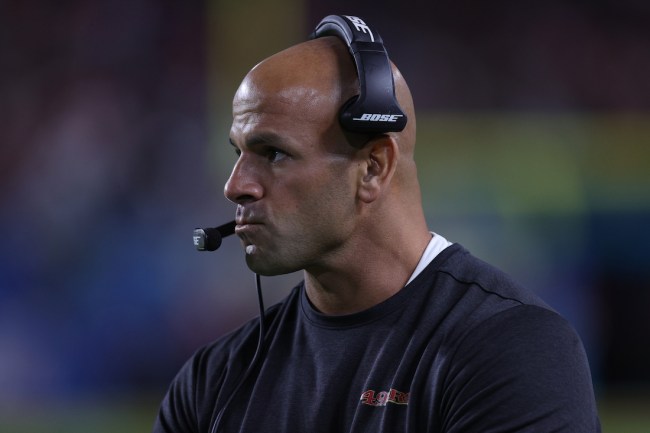 When Robert Saleh was hired by the New York Jets as their next head coach during this NFL offseason, it really shouldn’t have been that big of a  surprise. After all, the 42-year-old had previously excelled as the defensive coordinator for the San Francisco 49ers, helping the team reach the Super Bowl during the 2019 season thanks to a lethal defense.

At some point, Saleh was going to get his shot to lead an NFL team, as his name made the rounds with franchises for a couple seasons about one day becoming a head coach. Now that he’s got his shot thanks to the Jets, one would imagine he’s soaking it up and really tackling the role head on, right? Well… he probably is on the days he remembers he’s actually the head coach.

While talking to the media on Friday, the New York Jets head coach told an interesting story that, hopefully, won’t become the punchline to his tenure with the organization. That’s because, according to Robert Saleh, he forgot that he was no longer just a coordinator, but, in fact, the head coach. Here’s how he described the brain fart to reporters.

“I’ll give you a quick, funny story,” Saleh told reporters. “We just had our bigs out there and we were going through stuff when the horn blew for practice to be over. I started to take my normal spot behind the huddle to listen to the head coach speak when I was like ‘Oh, shoot. That’s me.’ But no, it’s been good.”

At the end of today's morning session, #Jets HC Robert Saleh went to the back of the huddle and was ready to listen to the head coach speak… he then remembered that's him. 😂😂pic.twitter.com/ZtVamZND3q

Uh, if you’re a Jets fan, are you seriously entertained by this or no? Like, it’s a pretty endearing story that’s worth a chuckle for a first-time head coach just relaying his own, personal “welcome to the NFL, coach” moment. Plus, it’s not as if Robert Saleh did this during an actual game when the pressure was really on, since it just came during one of his first practices during this NFL offseason.

Then again… sheesh, this is the Jets, and it seems like anytime you hear a story like this, it’s an early indicator that the ship is about to sink further into the ocean and that Saleh’s tenure leading the franchise is as good as doomed. Remember when former head coach Adam Gase became a walking meme thanks to those wide, goofy eyes of his during his introductory press conference in 2019? Yeah, that’s now part of his lasting legacy.

If you’re a New York Jets fan, hearing a story like Saleh’s has to make you a little nervous. It has to make you worried that the football gods are doing what they can to prevent the team from winning. It has to cause a few swear words mocking the new head coach for having such a lack of awareness.

Or maybe it’s just a story that, in a couple years, will be referenced after the Jets win a playoff game under Robert Saleh, with a news headline reading something like “From Brain Fart To Brainchild, How Robert Saleh Became A Head Coaching Genius”. For the sake of Gang Green fans, let’s hope that’s the outcome and this story isn’t a recipe for further disaster.