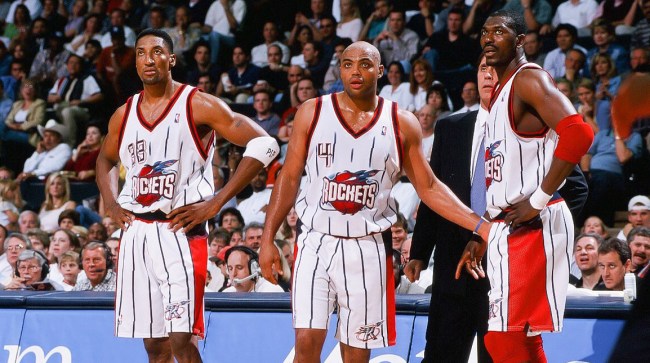 After being the most underpaid player in the NBA for several years, Scottie Pippen, as anyone who has watched The Last Dance is well aware, was not a very happy man. (Though as his ex-wife Larsa pointed out, he ended up doing okay.)

So when Chicago Bulls general manager Jerry Krause decided to blow up the greatest team in NBA history by not resigning head coach Phil Jackson, Dennis Rodman and Scottie Pippen, causing Michael Jordan to head back into retirement after playing in all 82 games, averaging 28.7 points, 5.8 rebounds, en route to a sixth NBA championship, Pippen went looking for a new place to ply his wares.

That place turned out to be Houston where the member of the NBA’s 50 Greatest Players club joined two other guys on that list, Charles Barkley and Hakeem Olajuwon.

After signing a five-year, $67 million contract with the Rockets, Pippen may have been more happy with his financial standing, but that certainly didn’t translate to more success on the court.

In fact, Pippen and Barkley butted heads, Scottie got arrested for drunk driving, and the Rockets ended up getting bounced in the first round of the playoffs.

When the next season began, Pippen was wearing a Trail Blazers uniform.

One of Pippen’s other teammates that season in Houston was the team’s current broadcaster Matt Bullard, who played nine seasons for the Rockets.

On Tuesday, Bullard was on with SportsTalk 790 in Houston and talked about that disappointing season with Pippen as a teammate.

“I didn’t realize that he was coming off of being very underpaid for seven years,” Bullard said. “So I didn’t know that he had that saltiness about being underpaid when he came to us. But I do remember, the rest of us Rockets when Scottie came, and it was already after training camp had started a little bit, and he came into Houston, and he never really did integrate himself into the Rockets’ organization.

“He never really tried to make an effort to be a Houston Rocket and I think all of us sort of felt that. He was coming in thinking, ‘Hey, I’m Michael Jordan.’ I mean, not really Michael Jordan, ‘I’m Scottie Pippen,’ but the rest of us could feel that. He never really tried to become a Houston Rocket and those types of things still stick with me. He played one year with the Rockets and then we traded him to Portland and his career was basically over by then. But, looking back on all the teammates I’ve had, I would say that Scottie Pippen was not one of my favorite teammates. Because when I did play with him, he wasn’t trying to be a Rocket. He was just trying to be The Man, and it didn’t really work.”

On the other hand, Bullard said playing with Barkley was a pleasure.

“When Barkley came to the Rockets, he did try to integrate himself into the team,” said Bullard. “He did a really good job of being a great teammate. He’s one of my favorite teammates of all-time. And I will say this, he was old by the time he got the Rockets. He wasn’t at his best. He wasn’t working out super hard like LeBron James does now to keep his body in as good a shape as he possibly could, but he was a great teammate, Barkley was. I really enjoyed playing with him, and he really tried to make the Rockets better and play alongside Hakeem and Clyde [Drexler], and really tried to win games.

“But Charles and Clyde got a little sideways, and then when Clyde retired, then we brought in Scottie Pippen and Charles had to take a pay cut in order for Scottie Pippen to sign that big contract. And so I think when Charles made the sacrifice to take less money to bring in Scottie Pippen, and then Scottie Pippen comes in and doesn’t try to integrate himself into the roster or into the team, I think that really rubbed Charles the wrong way. I think Barkley really wanted to win a championship.”

Bullard also shared a story about how one time the team was on a bus when Pippen started acting up, “We’d maybe lost a game and we were all on the bus and we were going to the airport and we were all down and we heard in the back Scottie Pippen say very loudly so everyone could hear it, ‘Aww, we would have never have done this with the Bulls!'”

When asked to share more stories about his season with Pippen, Bullard declined, leaving it at, “I’m not going to throw all the stuff out in public, but I will say that Scottie’s not one of my favorite teammates. He just… he never really was a Rocket, and that really pretty much just summarizes it right there.”