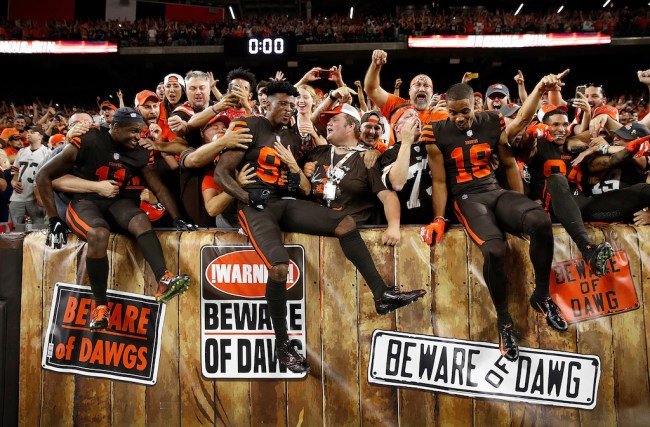 I don’t expect much when Roger Goodell say something. That’s not to say I dislike the guy, but the proof is in the pudding, as they say, with the NFL Commissioner often fucking things up royally when it comes to saying or doing the logical thing. Whether that’s relating to player safety, social issues and everything in between, Goodell’s often the butt of jokes more often than not.

Well, it’s time to laugh at the dude again because, during a conference call with reporters on Tuesday, Roger Goodell actually had the balls to say that there’s no competitive advantage for NFL teams having fans in the stands this upcoming NFL season versus those which won’t. Seriously, he said that… publicly.

“We do not believe it’s a competitive advantage,” Goodell said. “We discussed it very early on with our Competition Committee and with our clubs. We do not see that. We obviously have varying capacities across the league, and from our standpoint, we want to invite our fans in if we can do it safely and we can do it with the full support of local officials. We think our fans want to come the stadium.”

Uh, what? Does Roger Goodell the entire reason homefield advantage exists in sports? It’s not only because players can sleep in their own beds, but, you know, because thousands of fans in the stands are going fucking nuts over their teams, and/or talking mad shit to the opposing players.

Roger Goodell: " We don't see a competitive advantage for teams with fans compared to teams without fans."
Translation: "You think I'm going to tell Jerry Jones he can't have fans?"

So….the Commissioner of the NFL is claiming that fans DON’T matter in the outcome of games?
That fans have NO influence?
Hmmm
Very curious admission

All discussions should end with your tweet dude. pic.twitter.com/gqjyhbKaBe

So, you’re telling us that they have never attended a NFL game in Seattle or Kansas City????

For all you Roger Goodell supporters out there (which, honestly, do they exist?), I know that the Commissioner was probably referring to the fact that stadiums at 20-25 percent this NFL season won’t have a major impact on the outcome. But even that comes across as ignorant, because that’s still about 10,000-12,000 people — which is a helluva lot — who are holding up signs and cheering for their teams. There’s no doubt that that brings energy to players.

What makes the Goodell quote even more questionable is this: The league is expected to use artificial crowd noise at stadiums without fans this NFL season, meaning the Commissioner sort of contradicts himself about the influence of cheering on a game. It means that, when fans are in the stands, home teams will have the advantage of their fans staying quiet, while opposing offenses will be tasked with the crowd noise. Man, I just can’t with this guy.

It probably would’ve been better for Roger Goodell to just admit that, yeah, there will be an unfair advantage for teams who allow fans versus teams that don’t. It’s OK, Roger, I promise the world will not explode if you admit something that’s actually sane.