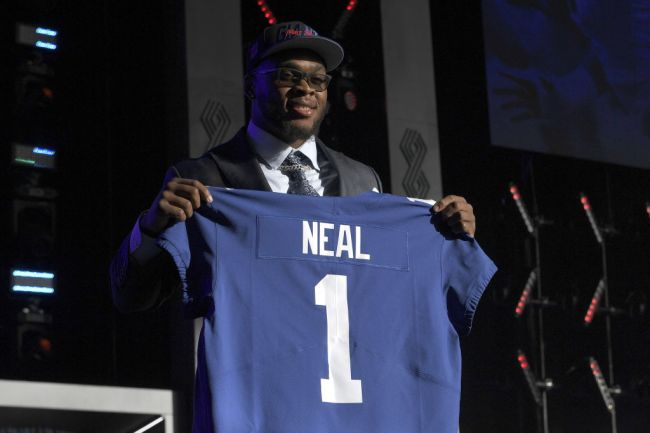 The New York Giants had a chance to truly begin building something great this offseason with a brand new coaching staff, changes in the front office, and a pair of top-10 draft picks. So far, it appears they’ve done a good job of making that chance count.

The Giants received quite a bit of praise for how they spent those top-10 picks, using them to draft Kayvon Thibodeaux and Evan Neal.

Today, Neal, an offensive lineman who played his college football at Alabama, showed exactly why the Giants wanted him.

In a drill at training camp, Neal was blocking for a running play that started at the 10-yard line. Not only was his block successful on the play, but he dominated the defensive lineman lined up across from him.

He forced that lineman the way back into the end zone as his running back scored a touchdown.

This impressive performance from Neal won’t come as much of a surprise to those that watched him play at Alabama. He regularly put his strength on display as he established himself as one of college football’s best pass blockers.

There were many who believed the 6’7″, 337 pound prospect would be the first lineman drafted this year. He ended up being the 2nd off the board when the Giants drafted him 7th overall.

The Giants will be hoping that he can help fix an offensive line that has been an issue for them for years. Having him protecting the blindside for Daniel Jones could make a big impact for the Giants as they take one final look at their quarterback’s capabilities.

Neal is certainly the most exciting prospect the New York Giants have had on their offensive line in quite some time.