Rules For The Upcoming Floyd Mayweather Vs. Tenshin Nasukawa Fight Have Been Revealed 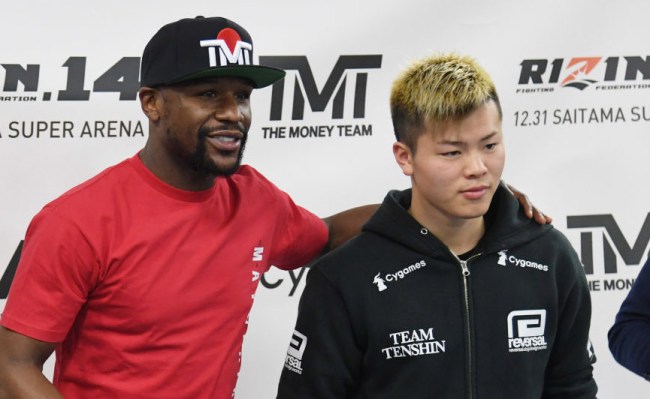 After being announced, then called off, then revived, the upcoming fight between boxing legend Floyd Mayweather and Japanese kickboxing sensation Tenshin Nasukawa is really happening. And we have proof!

Because on Thursday, the 20-year-old Nasukawa, 27-0 in his career, was inside a boxing ring in Las Vegas showing off some seriously fast hands.

When he met with the media, Nasukawa took another well-aimed shot at Conor McGregor, saying he believes he can do better against Mayweather than “The Notorious One” did.

Also, as a part of the media day, the rules for the exhibition matchup taking place during Rizin 14 at Saitama Super Arena in Japan were revealed.

• Three minutes per round for three rounds
• Straight boxing rules
• Both will wear Rizin 8-ounce gloves
• Weight: 147lbs/67.7kg
• No judges
• This will be full-contact competition, but the bout is not going on boxing or MMA records

According to MMAFighting.com, Nasukawa typically fights at around 121 pounds, while Mayweather fought Conor McGregor in 2017 at 154 pounds.

”I love competing against fighters from all walks of life like in my amateur days,” Mayweather said via press release. “It’s all about entertainment. Nine minutes of entertainment. It’s going to be amazing.

”I’m in the entertainment business. That’s what I go out there to do. I love to do this. I’m working out to put on a show for three rounds.”

RIZIN 14 takes place on December 31. The full fight card can be viewed here.