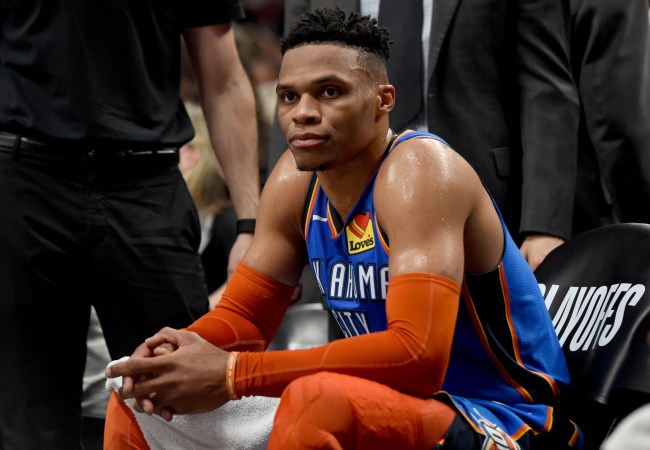 Russell Westbrook might be the first player in NBA history to average a triple-double in three-straight seasons, which is an impressive mark that he may just continue adding to as his career moves along, but, damn, he sure isn’t playing like a superstar and former MVP in his team’s NBA Playoffs series against the Portland Trail Blazers. Westbrook’s Oklahoma City Thunder team finds themselves in a 3-1 deficit after a bad home loss in Game 4, and, well, people on Twitter are letting Westbrook have it after the way he played.

Not only did Russell Westbrook score just one point in the second half of the Thunder’s loss in Game 4, but, as has become his routine in the postgame press conferences, the All-Star point guard replies with “next question” when local reporter Berry Tramel asks him something about the game. Obviously, Russ has a personal vendetta against Tramel, and it’s been a topic of discussion around the league. But with the player passing over Tramel’s questions comes criticism — and social media was full of it following Game 4, using Russell Westbrook’s popular “next question” given his how terribly he’s played against fellow All-Star point guard Damian Lillard of the Blazers.

Here’s what some people were saying to Russ — and it includes some fire from Lillard’s injured teammate, Jusuf Nurkic, who has a history of sh*t-talking with Westbrook in the past.

Look at Paul George’s +/- this series and look at Westbrook’s and tell me who’s the best player on the Thunder! Let me guess…”NEXT QUESTION!” LOL

Westbrook: *attempts to get out the first round of postseason*

Westbrook keep popping off and saying “next question” while Damian is winning games. 😂😂😂 another 1st round exit for mr triple double.

Reporter: you guys seem to have a problem stopping Liddard

Reporter: it was a statement

Russell Westbrook and Paul George are a combined 11 of 34 from the floor. Next question.

Russel “Next Question” Westbrook. The karma is real.

Westbrook? James shot 3-20 and HOU won. You shooting 5-20 with four minutes left what happened? Next question. 😂😂😂😂

Westbrook better answer some questions tonight! Ain't no next question tonight, you gotta answer for this!

YIkes, it might be time for Russell Westbrook to start owning up and talking about how bad he’s playing this series, because Lillard’s stealing his lunch, the Thunder are on the verge of getting ousted in the first-round (again, which has become a common theme since Kevin Durant bolted in 2016) and hoop fans are having a good ol’ time laughing at Russ while it’s happening. After shooting just 5-for-20 and finishing with just 14 points overall in the loss — less than Damian Lillard had in the second half alone — Russ might want to change his tune a little bit.

Considering Russell Westbrook’s one of the best basketball players on the planet, he’s obviously got the talent to turn things around. That said, he’s not really proven he can do it come playoff time — even with another All-Star like Paul George next to him — and it seems like he’s in his own head at this point given all the stuff happening in the media, so he and the Thunder are just about toast.