Russell Westbrook Torches Lakers Fans After Yet Another Loss, NBA Twitter Comes To His Defense 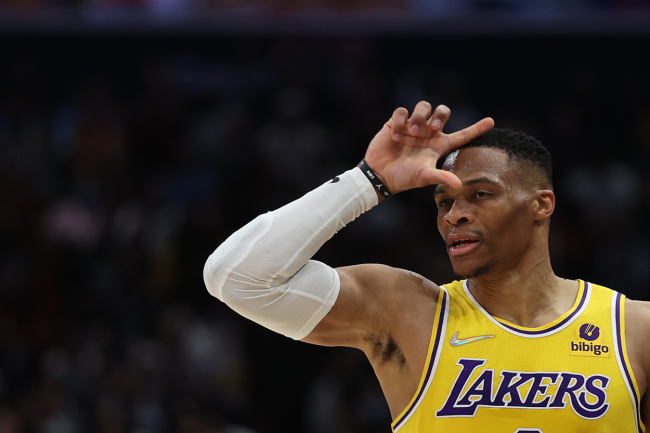 Russell Westbrook’s time in Los Angeles has not gone according to plan. The nine-time All-Star and 2017 MVP was supposed to be the piece that propelled the Lakers to an NBA title.

Instead, L.A. has fallen off of the 10-seed for the second time this season. The Lakers’ playoff hopes are definitely up in the air and the team will need to really turn it on down the stretch to ensure that they get in.

As of right now they would not even qualify for the play-in.

But Los Angeles just cannot get anything going. The Lakers dropped yet another game that it looked like they were going to win on Friday after holding the lead in the fourth quarter.

Amidst the struggle, Westbrook has been continuously roasted by both Los Angeles fans and opposing fans. He simply cannot leave them alone, which only causes them to get louder.

And yet, he doesn’t really seem to care about his own team’s fans heckling him since his arrival. He made a very telling comment after Friday’s loss that makes it clear just how over the whole thing that he is.

After being under constant criticism all year, Westbrook does not care to even attempt to have a relationship with his own fans.

Russell Westbrook to @mcten on how the https://t.co/zgfUpPn1br Arena crowd affects the team’s performance: “I don’t pay attention to this crowd, to be honest.”

Of course, NBA Twitter was all over his comments.

thats why he doesnt pay attention to them

All Lakers fans to Westbrook: pic.twitter.com/rVEGpNeuHe

When a player says this about the team he play for Its time to move on. EITHER TRADE HIM OR SEND HIM TO CHINA BUT HE CANT PLAY FOR THE LAKERS NEXT SEASON @Lakers @JeanieBuss

You really expect him to like him after sending death threats to his family? lol crazy

Crazy all laker fans saying “leave” or “gtfo” like they don’t have the worst and most toxic fan base 😭😂 a team supposed to support your players, not kick them when they are down

Westbrook’s future with the Lakers is unclear. For right now, he and his teammates need to focus on making the playoffs first.