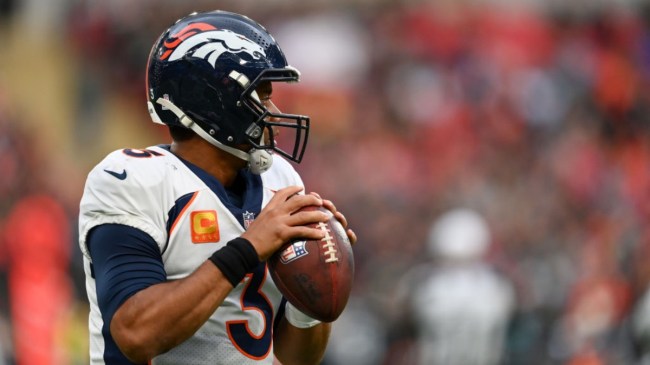 The Denver Broncos managed to make it out of London with a win over the Jacksonville Jaguars, but the performance hasn’t seemed to change the team’s perception of this season very much.

The Broncos still ended up trading Bradley Chubb today before the deadline passed.

They did hold on to Jerry Jeudy through the deadline, which is good news for an offense that has badly struggled even with him around. The Broncos remain one of the league’s worst offenses even after putting up their second highest point total of the season with 21 against the Jaguars.

The poor performances from the offense have led to quite a bit of scrutiny for Russell Wilson during his first season with the Broncos.

While there are many placing a ton of blame on him for the team’s struggles, one of his former teammates believes there is somebody else who is responsible for Wilson’s poor play. Richard Sherman revealed on Von Miller’s podcast that he believes the Broncos are to blame for Wilson’s struggles to start his time with the team.

“It’s almost like they didn’t even watch tape of him in Seattle.” 👀

Do the Broncos need to tweak their offense to fit Russ’ past schemes in Seattle? pic.twitter.com/g8YWJi79k2

Sherman doesn’t seem to be the only one placing blame for this season on the Broncos’ coaching staff as there have been a few reports indicating that Nathaniel Hackett has very little job security right now and that he might not even still be the coach if the Broncos had lost to the Jaguars on Sunday.

There has also been a report that he lost the team after his Week 1 decision to not put the ball in Wilson’s hands at the end of the game.

There has clearly been a disconnect between Wilson and his receivers this season and this could be the explanation for why.

If that is the issue, the Broncos will need to have something Wilson is more comfortable with installed by the start of next season or the trade for the star quarterback will be one that haunts them for a while.