Russell Wilson-Seahawks Drama Could Get ‘Very Ugly’ If Team Doesn’t Get Close To Super Bowl, Per ESPN Insider 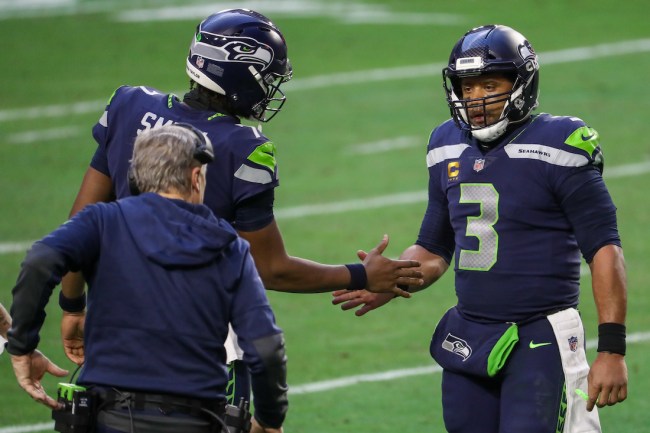 Throughout this NFL offseason, reports surfaced claiming Russell Wilson was unhappy with the Seattle Seahawks. From the team’s decision to fire former offensive coordinator Brian Schottenheimer, to the quarterback feeling as if the offensive line issues have yet to be addressed, the relationship appeared to be strained.

That was just the beginning, though, as reports in February presented an alleged list of Wilson’s preferred trade destinations. But was there truth behind all the rumors? According to Russ, no, with the perennial MVP candidate recently disregarding all the drama during mandatory minicamp this week.

“I think, unfortunately, it got a little bit blown out of proportion. I think that my ultimate goal is to win. You know I get paid to win . . . and we’ve done a lot of that over the years. The mission is to continue to do the same, but do a little bit more. I think the reality is that that’s the only thing I’m focused on is winning and doing whatever it takes to win. That’s why I wake up every day and lace my cleats to train every day. That’s what my teammates are doing, too, and so that’s what I’m looking forward to.

“In terms of the trade talks, I think anytime you play professional sports, there’s always a possibility of something happening, right? I think that’s just the reality. I think that there’s a lot of teams out there that people were saying that I was going to, or would go, that I requested a trade. I did not request a trade. I’ve always wanted to play here. The reality is I think calls were getting thrown around and this and that, and I mean that’s just a reality. But I think at the end of the day the real reality is I’m here and I’m here to win. I’m here to win at all.”

In case you couldn’t decipher, Russell Wilson is with the Seahawks to win. He continues to say the right things while attempting to defuse the situation by doubling down on his commitment to the organization. But could things still turn sour?

According to ESPN’s Jeremy Fowler, absolutely.

Speaking on Get Up on Friday, the longtime NFL insider discussed where things are currently at between Wilson and the Seahawks. And while the situation from this NFL offseason has smoothed a bit, any progress made could become “very ugly” should the team not come close to reaching the Super Bowl. Take a look below at what Fowler said.

“Russell Wilson was straight-up frustrated because he felt his name was floated in trade rumors even a few years back,” Fowler said. “And then this offseason, he had ideas to try to get the Seahawks back in the Super Bowl. He wanted to present them to the team, he was calling them up, saying, ‘Hey, what are we doing here, there?’ He felt like that was met with resistance, that they weren’t hearing him. So there was straight-up consternation.”

“Things are much better now, but his contract is very much tradable next year, where the dead money on the salary cap gets cut in half to $26 million,” Fowler said.

Fowler’s recent report mirrors something he said a few months ago, claiming his sources believe it’s an “inevitability” that Russell Wilson gets traded by next NFL offseason. Considering Wilson’s only in Seattle “to win”, in his own words, then the thought that tensions could rise again next year if the team doesn’t compete for a Super Bowl is very real.

For now, the quarterback’s saying the right things and playing damage control following reports of his unhappiness this entire offseason. That’s how he’s always been when it comes to his relationship with the Seahawks and the city of Seattle.

However, if Tom Brady can leave the Patriots and Aaron Rodgers can try to force the Packers to trade him, Wilson can find a way to leave, too. So, yeah, he’s going to play nice to avoid tension heading into next season, but this situation sure doesn’t appear to be going away anytime soon.