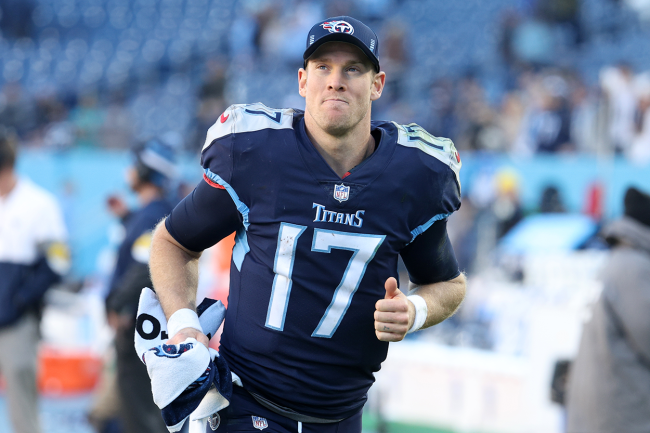 On Thursday evening, the Tennessee Titans made the biggest move of the 2022 NFL Draft. After weeks of questions surrounding A.J. Brown’s future in Nashville, the franchise decided to trade him to the Eagles and selected Treylon Burks to replace him.

Burks has received quite a few direct comps to Brown, so the void that was created by trading the latter is set to be replaced by the former. Whether that ends up happening or not is, obviously, yet to be seen.

However, either way, quarterback Ryan Tannehill — and third round pick Malik Willis — will have a new target in 2022. As a result, one would assume that the franchise quarterback would reach out to his new, first round receiver almost immediately after he was drafted.

Tannehill and Burks are going to be working closely for the foreseeable future and it would make sense for them to connect. Typically, Tannehill would reach out to Burks to welcome him to Tennessee via FaceTime, phone call, text, or even social media DM.

That was not the case as of Friday afternoon.

As of 3:24pm CST on Friday, April 29 (about 20 hours after Burks was drafted) the Titans’ newest pass-catcher had heard from some of his teammates, but not his quarterback.

Treylon Burks tells @3HL1045 that he’s heard from new #Titans teammates Robert Woods and Ben Jones. Said he has not heard from QB Ryan Tannehill yet

Later in the evening, Burks said that he was acquainted with Tannehill and running back Derrick Henry from their time playing Madden together in the past. He also said that he has tremendous respect for the man who will be (presumably) throwing him the ball.

Treylon Burks said he played Madden with Ryan Tannehill and Derrick Henry. Called them both leaders. Said RT “takes care of his business on the field.” #Titans

We don’t know if Tannehill has reached out since, but to not even text Burks after he was picked? Strange.