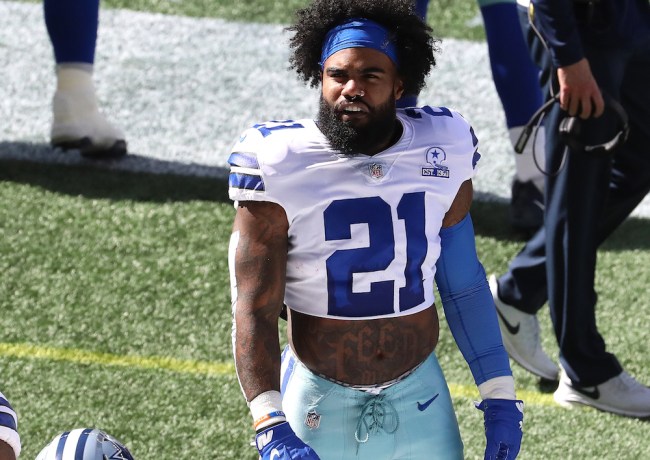 Former WWE star Ryback is willing to take legal action towards Dallas Cowboys star Ezekiel Elliott over his use of “Feed Me.”

Elliott recently showed off the new ink along with “Stay Hungry” bowling shoes.

In a recent episode of his podcast, Ryback addressed Elliott’s new tattoo possibly infringing on his trademark of “Feed Me More.”

Ryback feels that Elliott’s trademark claim would be denied because “it’s clear the NFL star took the slogan from him.”

“It’s far too similar,” Ryback said. “You’re literally trying to latch onto somebody else’s brand and then take it and make it your own in the same exact thing. It’s like, come on, be a little bit more creative. He’s a wrestling fan. He got it from me – he 100 percent got it from me. I’ve already established it and own it. I think it’s just really, really low.”

Ryback continued: “Everything’s documented timeline-wise. I think there’s zero chance in hell he gets it. But for whatever reason, if they have an attorney that’s able to pull strings, then I’ve simply got to oppose it. I’ll tie him up for years, so he better get a good tattoo artist to cover up that shitty tattoo on his stomach.”

Ryback has used the “Feed Me More” slogan for over a decade and launched a line of nutritional supplements with the same name.

On the subject of court battles, Ryback is already in the middle of a legal battle with WWE over his own name.

When Ryback left the company, he legally changed his name from Ryan Reeves to Ryback Reeves as a way to continue to use the name he made famous.

WWE originally applied for the Ryback trademark in 2011 and then renewed it back in 2019, which was three years after Ryback had departed from the company.

Reeves filed a petition with The United States Patent and Trademark Office in order to cancel the registration by WWE.

It should be noted that Reeves filed an application to gain ownership of the name in May 2019. As of this writing, he has yet to be granted ownership from the trademark office because of the legal proceedings between the two sides.

Ryback addressed the situation on Twitter, calling the company “petty” for renewing a trademark they no longer use.

I want everyone to see how petty @wwe is. A trademark that they renewed the last day so I couldn’t get it for a minimal fee and one they don’t use anymore and haven’t used in games, MERCH etc. I am the trademark and created prior to working there. Let it go and let’s move on! 💪 https://t.co/qQ4gxyOtUf