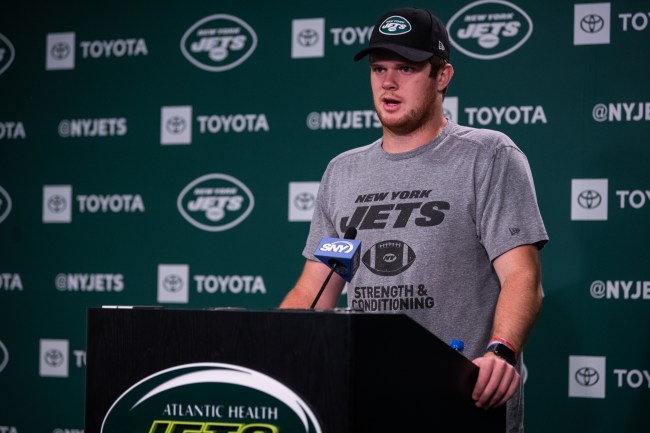 Sam Darnold is SoCal through and through. Just looking at the New York Jets quarterback gives a sense that the guy is naturally calm, cool and collected. It’s part of the reason why Darnold was so successful while playing in college for the USC Trojans, and why so many people think he’s destined to be great for the Jets as he enters his second season in the NFL.

It’s one thing to trust appearances, because, on the surface, Sam Darnold looks like a Frat Daddy who wakes up on couches after a weekend-long bender, somehow bouncing back stronger than anyone. And, if you’d think that description accurately fits Sam Darnold, you’ll be interested to hear his reputation with some within the Jets’ organization lives up to it — at least in the eyes of the team’s Wide Receivers coach, Shawn Jefferson.

When talking to Manish Mehta of the New York Daily News, Jefferson not only raved about Sam Darnold’s ability as a quarterback, but he gave a sense that, yeah, he’s the bro who everyone just wants to hang out with. Take a look at what Mehta tweeted about Jefferson’s hilarious praise.

Quote of Day from Jets WRs coach Shawn Jefferson… on Sam Darnold:
"Excuse my French… but he’s a fucking dude. He’s a fucking dude with a fucking arm. And he’s accurate as shit. So, excuse that… It's awesome to be around a guy like that" pic.twitter.com/totSI0wqbG

I don’t know about you, but if someone else referred to me as being “a fucking dude,” I’d be pretty stoked. It’s the ultimate sign of respect, personally speaking, showing that you’ve just got it all together. If that’s how Jefferson feels about Sam Darnold, maybe everyone’s right in thinking the QB’s going to have a solid NFL career.

While the Jets have gone through some changes since last season ended — along with some dysfunction — the team’s hedging their bets on Darnold, hoping that the additions of All-Pro running back Le’Veon Bell and some other skill players can help them make a surprise playoff run. Who knows if that will happen or not, but at least they’ve got a guy under center who seems to be admired by others in the team building; which has to count for something, right?