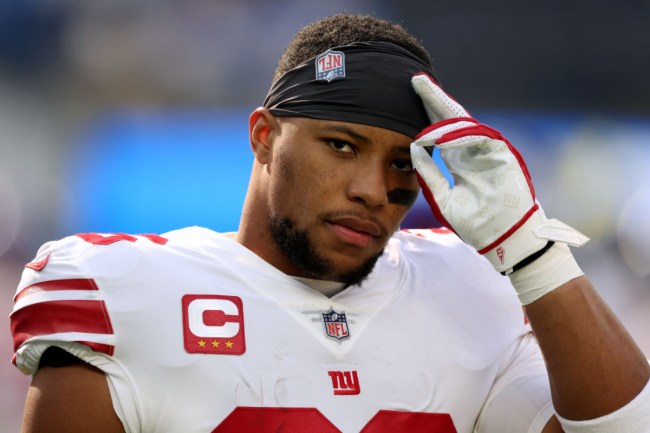 The oft-injured rusher seems to have missed as much time as he’s played throughout his brief four-year career. Since entering the league in 2018, Barkley has played in 44 contests while having to sit on the sidelines in 21 matchups.

When on the field, the former Penn State star has been productive. He’s totaled 27 touchdowns, becoming a threat in both the passing game and the rushing attack. He burst onto the scene as a rookie, notching more than 2,000 yards from scrimmage to lead the league. He was named Rookie of the Year soon after.

Unfortunately, he’s seen a decrease in performance with each passing season, failing largely to live up to his first-round billing.

With Barkley returning from injury in 2021, he posted career lows in yards per carry, total touches, and rushing scores. The Giants were careful in managing his workload as he worked back from an ACL tear.

But many were wondering if they were saving their prize pick for a potential trade or if they were committing to their star rusher for the long haul.

On Monday, we may have gotten that answer.

The Giants have come out with a statement on their running back, and it appears that they want to keep Barkley in New York for the foreseeable future.

The Giants are reportedly not shopping the rusher around to other NFL teams. They have received a few calls from potential suitors, but they’ve got no interest in dealing the back.

Joe Schoen: “Haven’t called one team on Saquon Barkley.” He says they’ve had some calls but he’s a good player. Was the No. 2 pick for a reason.

“He’s a good player. He was the No. 2 pick for a reason,” GM Joe Schoen said on Monday.

Hopefully, Barkley can return to full speed in 2021 because he’s fun to watch when healthy. The Giants will hope for the same as they look to make a move up the NFC East standings.