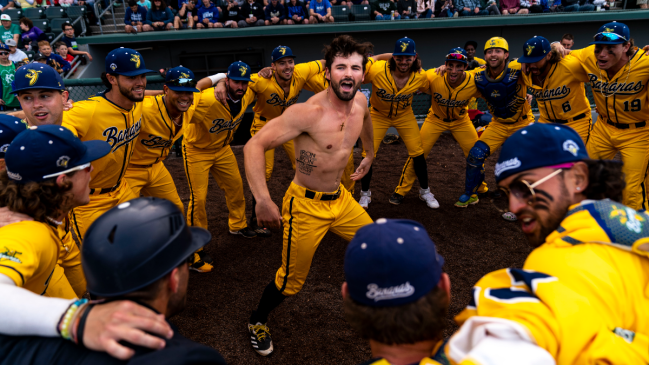 If you’re a baseball fan who hasn’t been sleeping under a rock for the past few years, you’ve probably heard of the Savannah Bananas.

The Bananas are an exhibition baseball team, based in Savannah, Georgia, that focuses on as much about putting on a show as they do winning games.

The team was founded in 2016 and has since won three Coastal Plain League championships. But the collegiate summer league team isn’t really known for its results. Instead, the Bananas are known more for their absolutely wild gimmicks.

Past instances of this include reviving the Harlem Shake, fielding the tallest pitcher in baseball history, and bringing in a 75-year-old pitcher who actually struck somebody out!

As you can imagine, ticket demands for Savannah are through the roof. The team even went on a world tour and plans to do the same in 2023. The Bananas are basically the baseball version of the Harlem Globetrotters.

That means that they put fans first. Which includes no exceptions.

That resolve was put to the test recently. Owen Poindexter of Front Office Sports reports Savannah opted to turn away a $1 million ticket order recently.

The quirky independent baseball team, known for its team dances and unique “Banana Ball” take on the game, was offered $1 million to purchase “a large amount of group tickets for every single game on our 2023 tour and buy them from us at twice our price of $25,” according to team owner Jesse Cole.

Cole wrote that he immediately rejected the order, which would have “produced a half a million dollars in extra profit” for the Bananas.

Cole also stated that the team currently has a waitlist of over 500,000 people. That’s a lot of banana demand!

The Bananas are set to take on a seven-month, 33-city tour across 22 states this summer. It’s clearly they’re not lacking for demand. But the latest move just shows, yet again, that the bananas are for the people.