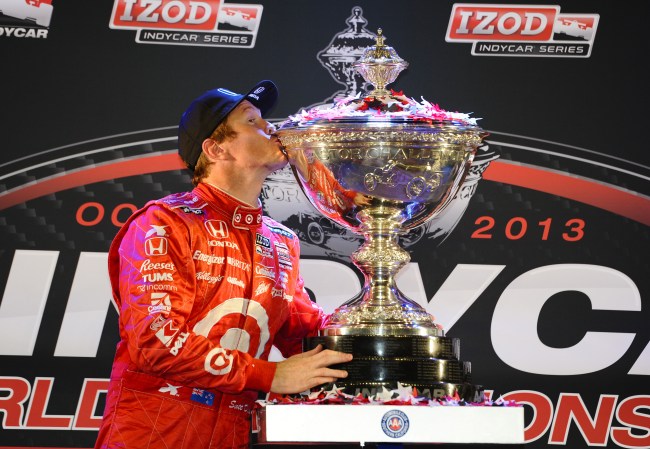 If a man cannot get a Cheesy Gordita Crunch after winning the Greatest Spectacle In Racing, America has truly lost its way.

In 2017, five-time IndyCar champion Scott Dixon experienced one of the greatest moments of his life directly before experiencing the most terrifying.

The New Zealander appeared on our Endless Hustle Podcast to detail the Taco Bell experience heard round the world.

What better way to celebrate the Indy 500 than getting robbed at @tacobell?! 😳 @scottdixon9 tells this true story & more on tomorrow’s new episode of Endless Hustle: https://t.co/Zm4LjxTiDu pic.twitter.com/h3DB6nlz7e

It was Dario Franchitti and myself and you know, the media portion goes on for quite some time. We were meant to go to some restaurant in downtown Indianapolis and then it was like 9:30 or something, so I said to Dario, “Let’s just go to Taco Bell.”

And so we drove down there and we’re sitting waiting in line and I remember seeing out of the corner of my eye something go behind the car. And then all the sudden there was a gun in the car. I’m like, ‘Oh, my God!’

But I thought it was because in racing, especially during the month of May, there are a lot of people–teams, drivers, everybody—hangs out and there’s a lot of pranks that are put on.

And now I’m looking at the gun and I’m like, ‘Man, that gun looks really real.’

And then on Dario’s side of the car there was another person trying to smash the window. And I’m like, ‘This is really serious. This is a pretty big joke.’

He was asking for wallets and I didn’t have my wallet on me, because it was locked in transport. I actually had my wife’s wallet, so I was like, ‘Here’s a wallet, there’s actually going to be nothing in it besides some credit cards.’

Dario, being the Scotsman that he is and has alligator arms, couldn’t even reach for his wallet.

Luckily a car pulled up behind us and they skated off.

Super intense, it was the weirdest thing where everything slowed down. And the funniest part was then at the little speaker box, the person at Taco Bell was like, ‘So are you guys going to order, what’s taking so long?’

Luckily, two hours later they could see what car this person was driving and they ended up finding the two people that did it…It turns out they were part of some big gang from Chicago.”

Most importantly, Dixon ended up getting his Cheesy Gordita crunch with beef and beans. For free.

You can listen to the entire electric interview with Scott Dixon below (55:40 mark).

We also talk to NBA OG Jalen Rose, who is by all accounts, lightning in a bottle.