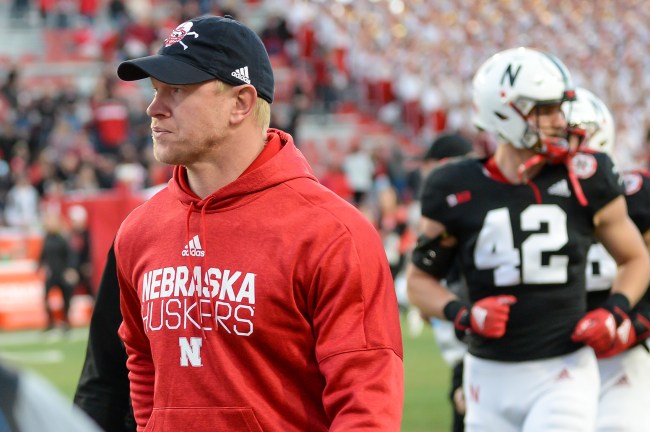 Scott Frost came back to his alma mater, the Nebraska Cornhuskers, to reshape the reputation of the program and help return it to its glory days. As a member of the 1996 and 1997 teams, Frost was a starting quarterback who helped guide the team to 24 wins and a national title in his two seasons, playing under legendary head coach Tom Osborne and learning what it meant to play for the school.

Unfortunately, since taking over the head coaching position before the 2018 season, Scott Frost hasn’t quite seen the immediate success he had hoped for. With just an 8-12 record in 1.5 season thus far, Frost’s hope to strike fear in opponents who roll into Lincoln hasn’t been immediate, but he’s still trying anything he can to instill such intimidation — even if it comes in the most absurd ways.

How is Frost trying to do that? By making sure he’s got tough players who, get this, don’t wear sweatshirts on the field before the colder games coming in the midwest in states like Nebraska, Michigan and Minnesota because he thinks it’s soft. Just listen to what Frost had to say when talking to the media the other day about his players toughening up despite the cold, and his reasoning for those guys avoiding to wear hoodies in warmups.

“I told them ‘just OK never existed in the locker room that I was in when I was at Nebraska,’” Frost said. “I want guys that live and die for it that want to be great and are tough. I don’t want guys that go out in Minnesota with hoodies on everything for warmups. That just says to me that ‘just OK is enough.’ You got ridiculed or beat up when I was playing if you did that. We gotta keep getting tougher. We gotta keep getting more talent in here. And we gotta keep working. We’re just OK right now, and I’m not going to be happy with ‘just OK.’”

Well, coach, how do you really feel? Of course, this all came from Scott Frost while he was wearing a F’in sweatshirt himself, but, you know, ignore that part of the equation, because his players need to be tougher than that. The entire soundbite below is something.

This soundbite from Scott Frost, my goodness.
"I don’t want guys that go out in Minnesota with hoodies on and everything for warm ups. That just says to me just OK is enough, I’m a little cold so I’m going to come out here in that." #Huskers pic.twitter.com/9Vjl6P7isS

It’s hard to argue with Scott Frost about the football side of things — as a head coach, you want tough players who will find that second gear inside of them to perform at the highest level — but this whole no hoodies thing isn’t really the right way to voice that desire. Just because a guy might be cold before a game doesn’t mean he’s soft, but Frost seems to be suggesting that, which might come back to bite him in recruiting.

However, Frost is the head coach with the task of turning around the Nebraska program, so he has a very specific player he’s looking for to help in that journey. But if it means that the Scott Frost wouldn’t be interested in a five-star recruit from Ohio because he warms up in a hoodie, then the guy probably won’t be the head coach much longer. Bottom line: He needs better players, not just tougher players.