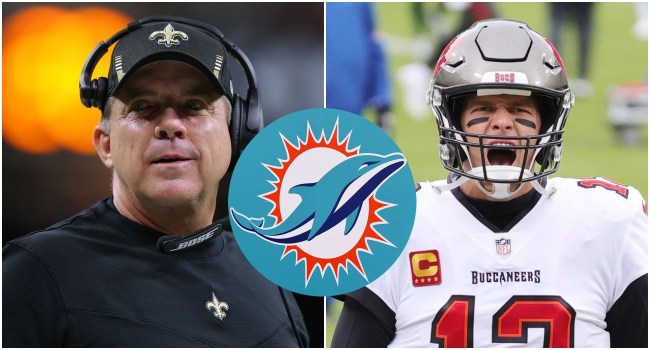 According to various reports in recent weeks, prior to Brian Flores’ lawsuit against the Miami Dolphins, Tom Brady was allegedly planning to finagle his way to the franchise with head coach Sean Payton in tow. The Boston Globe reported on the plan in detail back in early April:

Payton, who recently spoke to reporters at the Zurich Classic celebrity shootout, addressed the rumors of him trying to make a move to Miami, and while he did admit that “intermediaries talked,” he played coy when it came to Tom Brady’s involvement.

“I have no clue about the Tampa Bay, Miami Dolphin, Tom Brady rumor,” Payton said. “My understanding is that there a request was put in or that intermediaries talked. I’m like the rest of you. I heard that story.”

“If I would have been ready to coach like this year, I would have stayed in New Orleans,” Payton said. “And so it’s nice to have someone interested and, yeah, that’s about it. Look, our focus on Tom Brady has been beating him, not joining him.”

In late January, Payton told Dan Patrick that two teams had reached out to Payton through back channels. [via ProFootballTalk]

Ultimately, it’s a shrewd non-answer from Payton, who was able to address the reports without really saying anything at all.

Regardless, Brady and Payton’s alleged plan to abscond to South Beach was blown up by Brian Flores’ lawsuit —  who “filed his lawsuit against the Dolphins and the NFL alleging racial discrimination, as well as making explosive allegations against Ross of trying to lose games intentionally and of tampering with a certain star quarterback” — which was made public on the same day that Brady announced his retirement.

This, according to The Boston Globe‘s report, “messed up everything,” as “the plan to hire a white coach and a white team president without going through the Rooney Rule probably wouldn’t fly once the Dolphins were sued for racial discrimination.”

While NFL writers such as Yahoo Sports’ Charles Robinson and ProFootballTalk’s Mike Florio believe the league should investigate Brady and the Dolphins, there’s no chance that they will now that the alleged plan ultimately didn’t come to fruition. If there’s one thing we know about the NFL, it’s that they like to let sleeping dogs lie when they can.