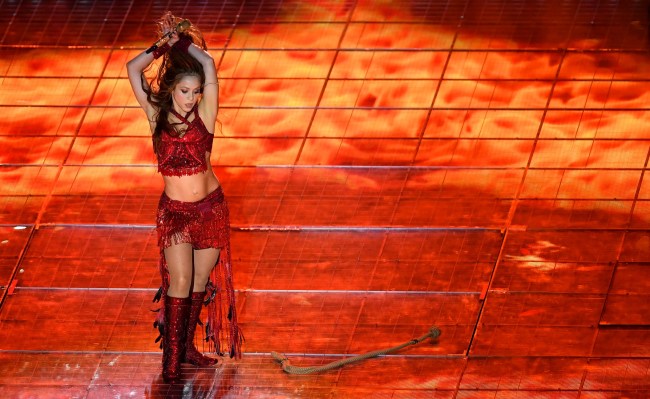 Shakira and Jennifer Lopez put on one hell of an entertaining Super Bowl halftime show on Sunday in Miami.

Many viewers even went so far as to say it was the best Super Bowl halftime show they had ever seen.

Regardless of whether people loved it or hated it (amazingly, some did), one thing is for sure, Shakira and JLo certainly got people’s attention.

From their outfits and the songs they performed to their dancing and the subtle political statement they made, the two women made a huge impression on all who watched them.

The most memorable moment, at least in terms of the amount of traction it got on social media, however, happened as Shakira was performing her iconic song “Hips Don’t Lie” when she stared into the camera and made an unusual sound with her tongue.

Not sure what Shakira did here but I’m still into it pic.twitter.com/xx2X7jxOOS

Almost immediately, this moment was turned into a meme by the internet.

Babies when they eat a lemon for the first time

It’s so rare that the world gets to watch the birth of a meme all together live. Thank you @shakirapic.twitter.com/WctVuNHGzv

It turns out that, according to a whole bunch of people on Twitter, what Shakira was actually doing was a celebration of her Lebanese roots.

Her paternal grandparents emigrated from Lebanon which is also one of the reasons belly dancing figures so prominently in many of Shakira’s performances.

And according to journalist Lulu Ramadan, what Shakira did with her tongue during her Super Bowl performance “is a popular Arab tradition, called zaghrouta, used to express joy in celebrations.”

Ramadan added, “In the melting pot that is Miami, you could not have picked a better Super Bowl act and this was a lovely touch.”

Chiming in because I know everyone will be making jokes about this for days — this is a popular Arab tradition, called zaghrouta, used to express joy at celebrations. In the melting pot that is Miami, you could not have picked a better Super Bowl act and this was a lovely touch. https://t.co/q1H9l8UpQ5

shakira,,,,,, the diaspora feels of it all !!!!!!!!!i feel seen, i feel appreciated. belly dancing shakira pulling a whole zaghareet, on national tv, when yt america tuns in the most, we love to see it

“Siri, how do I explain a zaghroota to white people?” https://t.co/TLMXyebYkJ

everyone is making fun of this but it’s a traditional arabic celebration chant, referred to as “zaghroota” pic.twitter.com/CP7XgY9dk2

You really have to understand how huge Shakira’s performance was for the Middle Eastern community. She had belly dancing, a mijwiz and a derbeke, performed “Ojos Asi” which was one of the few Shakira songs to have Arabic in it, did a Zaghrouta, all love on the biggest stage

SHAKIRAS ZAGHAREET SHE SAID HELLO I AM LEBANESE TOO https://t.co/dWT8kITDPF

Following the performance, Shakira shared a message of thanks.

“The best birthday gift has been the support of all my fans and the most amazing and hardworking team an artist could wish for. We Latinos climbed Kilimanjaro and made history tonight and we couldn’t have done it without all of you!” she wrote on social media.

Good luck to whoever gets the honor of performing at Super Bowl LV. You’re going to need it.