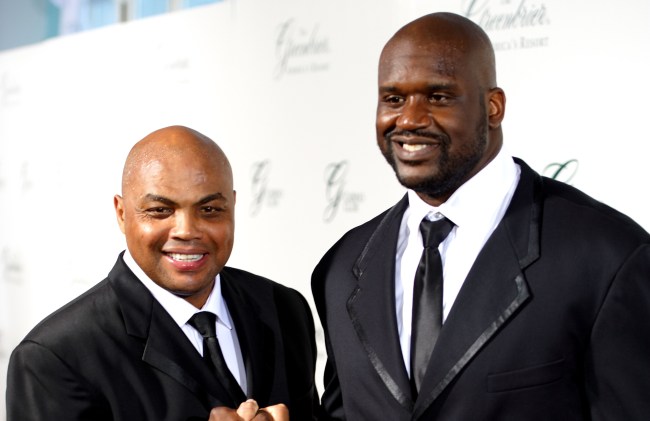 NBA Hall of Famers Shaquille O’Neal and Charles Barkley have become very close over the years as they’ve worked together on TNT’s NBA coverage.

However, they weren’t always the best of friends.

Back in 1999, when Shaq was a member of the Los Angeles Lakers and Chuck was playing for the Houston Rockets, the two of them actually came to blows and igniting a brawl during a game.

Kevin Harlan really is the best, isn’t he?

So, while Shaq and Charles weren’t always best of friends, it turns out that O’Neal’s mom, Lucille O’Neal, and Barkley’s mom, Charcey Glenn – who Shaq said was a “was a lovely, beautiful woman,” were best friends.

“Me and Charles had a fight, so he hits me in the head with the ball,” O’Neal told Jimmy Fallon on The Tonight Show Wednesday night. “And I’m like, ‘Charles I respect you but now I gotta knock you out.’ So I lunge with the left, I wanted him to come on the inside, but he went on the outside, grabbed me, pulled me to the ground.

“It wasn’t a real fight, but as soon as I get to the locker room the Houston security guard comes with the phone… so on a two-way [call] was my mom and Charles Barkley’s mom… And I, ‘Hello?’ and she was, ‘This is Charles’ mom and your mom’s on the phone too,’ I was like, ‘Yes ma’am, how are you?’ She said, ‘Y’all need to stop. I already talked to Charles. He’s gonna meet you in the hallway. Y’all need to stop and hug. Y’all are two of the greatest players in the world, we don’t want y’all fighting in front of the kids, y’all stop that.’

“So, yes, ma’am. I’m not going to be talking back. So I go in the hallway, me and Charles we hug it out. Because see, like, when you’re playing sports, it’s like a spur of the moment thing, it’s never personal. Not that I hate him, but, you throw a ball at me, I gotta knock you out, boy boy.”

And that, right there, is a perfect example of why Inside the NBA has won nine Emmy Awards.

Shaq also discussed a few other things like how he thinks he would have handled playing in this year’s NBA bubble.

“I would have struggled,” he said, before recounting his great story about seeing Halle Berry in the stands.

Shaq also poked fun at Charles for having bad breath, saying Kenny Smith loves having the plexiglass between him and Barkley now so he doesn’t have to smell it.