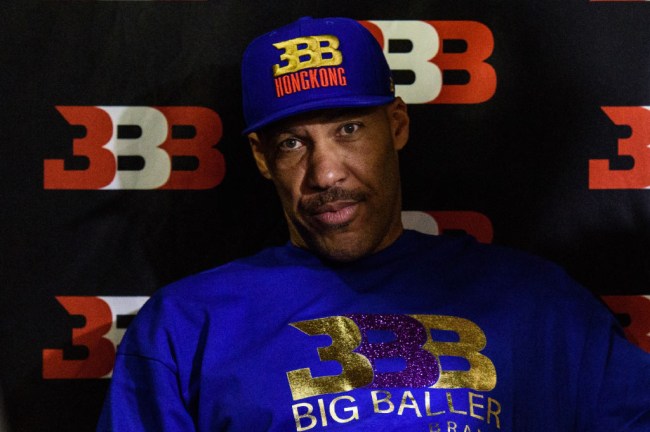 After the Lonzo Ball trade to the New Orleans Pelicans for Anthony Davis, the Big Baller Brand took a hit since Lonzo was no longer playing alongside LeBron James on the Los Angeles Lakers. But one person is sticking by Lavar Ball’s BBB despite the lesser spotlight of New Orleans — Shark Tank host Kevin O’Leary.

Big Baller Brand sneakers once sold for $500, but that’s not the case any longer. Last week, a BBB store popped up and they were selling Big Baller Brand merch. But the gear was SIGNIFICANTLY discounted. At a volleyball tournament in L.A., the BBB stand was selling merchandise on clearance. This is what happens when your website has been down for months.

BBB T-shirts and hats were priced at $5 and there was a package of a T-shirt, hoodie, pair of shoes and pair of socks for $100.

While much of the internet delighted in the downfall of Lavar Ball’s brand and believe the end is near for BBB, Kevin O’Leary is sticking with BBB. The Shark Tank star said don’t bury the Big Baller Brand just yet.

RELATED: ‘Shark Tank’ Investors Passed On This Company, Now They Raised $20 Million And Have A Deal With Dave & Buster’s

Kevin O’Leary believes BBB is too big to die. Despite Lonzo covering up his BBB tattoo, Mr. Wonderful says: “Any time you can your brand into the consciousness of the consumer, it’s good.” O’Leary points out that clearancing out old merch is typical for the fashion industry because they are dumping old styles to make room for the new line of clothing and sneakers for next season.

O’Leary told TMZ that Big Baller Brand is a part of culture and “it’s gonna stay around.” “It’s gonna go up and down, that’s just the nature of it,” Kevin said.

O’Leary points out that Lavar Ball’s boisterous style is perfect for marketing. “When you can get controversial news that comes out and people go nuts on social media with it, it’s very hard for it not to be good for you long-term,” O’Leary said. “It’s so noisy out there that a lot of these people are trying to create controversy so they get a ton of social media and traffic. Even if you think it is bad news, it’s not.”

O’Leary points to how Nike takes on controversial stances to stay in the focus of the consumer. Despite the kind words, O’Leary said he’s not a big fan of the fashion space, so he’s out of investing in Big Baller Brand. So Mr. Wonderful isn’t so sure of Big Baller Brand because he won’t put his money where his mouth is.

RELATED: Chris Gronkowski’s ‘Shark Tank’ Product Has Such Great Sales He’ll Have To Hire His Retired Brother Gronk To Help