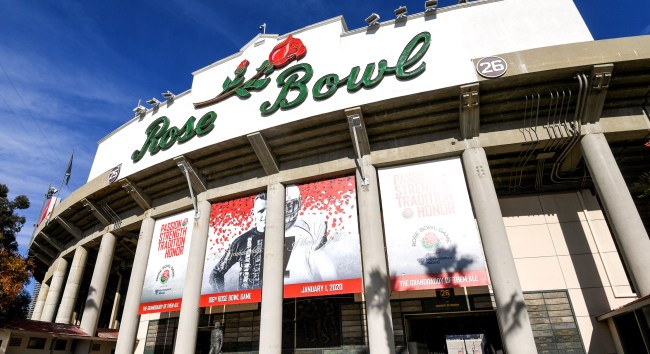 Despite literally hundreds of precedents being set that prove running on to the playing field at a sporting event will never end well, (especially during games involving the University of Oregon) a fan at the 2020 Rose Bowl decided to take his shirt off and have himself a little jog on the field during the game between the Oregon Ducks and the Wisconsin Badgers on Sunday.

The fan somehow managed to make it all the way to midfield, sans shirt, during the Badgers’ final possession of the first half, and he wasn’t even running hard.

However, once he was swarmed by a slew of security guards he looked like Marshawn Lynch in his best Beast Mode days, refusing to go down, churning his legs like he was fighting for that extra yard near the goal line.

As you can hear, reactions from the fans in attendance were mixed, but Wisconsin athletic director Barry Alvarez made no bones about what he would have done to our shirtless hero after his antics.

A shirtless man enjoying himself running around at the Rose Bowl pic.twitter.com/3lpRan8KXx

Gang tackling at its finest, right there, kids.

Obviously this Rose Bowl fan learned nothing from the two guys who got obliterated by Atlanta Braves security guards over the summer.

best run of the game